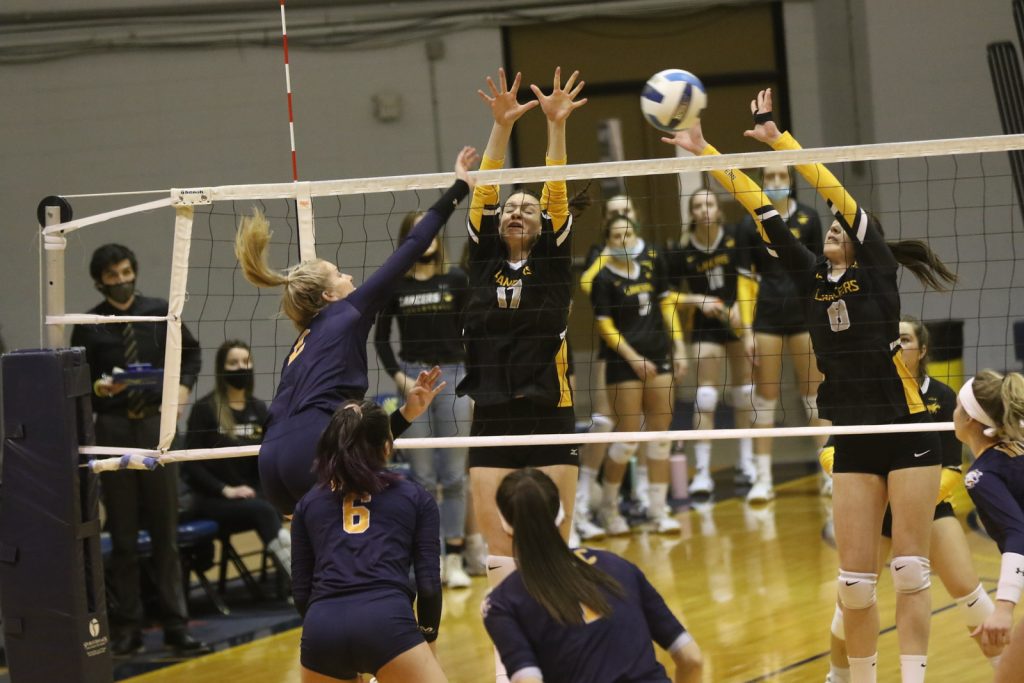 The 10th-ranked Western Nebraska Community College volleyball team had a quick start and then held off a Eastern Wyoming College comeback to earn a 25-13, 25-18, 25-21 win at Cougar Palace Tuesday evening.

The match was a battle between the two Highway 26 border-war teams in which the Lancers already owned a win over WNCC, topping the Cougars 3-1 at Cougar Palace back in January in the two teams’ season-opener.

Tuesday night was another battle with WNCC controlling the first set and then the two squads battling it out in the second and third sets.

Andrea Tsvetanova, who tallied 14 points and four aces, said her team came ready to play after suffering a defeat to Iowa Western Community College on Friday.

“We were ready to play because we lost last week against Iowa Western and we wanted to come back strong,” she said. “We got a really good lead and that is what helped us a lot. And it is very important to start off strong because you get more comfortable and you get to play your game. You don’t feel nervous and anxious. You just have fun.”

Tsvetanova said it was a good showing and a good team win as a lot of players saw action and contributed in their own way.

“I think we played as a team,” Tsvetanova said. “We played really good. We had good passing. We had good serving, setting, and hitting. We just played for each other and we got the win.”

EWC coach Dante Geoffrey said once they got things going in the second and third set, the match was competitive.

“It just took us a little while to get going,” he said. “When you are playing a top team like Western Nebraska you can’t wait around at all. When we got it going, it was obvious competitive and challenging match. We want to work on having that fight right from the start. It was a challenge and I think Western Nebraska’s talent and ability played a large part in that. But we made a large part in that also. We made things a little too easy on the Cougars tonight.”

Geoffrey said they tried different things in the match with different lineups to get everyone ready for the Region IX tournament that begins the last week in March..

“The good thing about today is we got to get some new people in the lineup. It is good for them to get that opportunity and understand that at anytime they might be called upon and they are expected to perform just like anybody.”

WNCC started off the first set on a tear as Karen Cordero got the opening kill and then Tsvetanova had six straight points for a 7-0 lead. Tsvetanova had three aces during that scoring spree.

WNCC pushed the lead to 11-3 on a Macey Boggs point but EWC fought back, slicing the lead to 11-6 after two Vanja Przulj points. Angel Nahinu stopped the rally with a kill and then Mariah Fukamotoa ran off a six-point service run to push the lead to 18-6. WNCC won the first set 25-13.

The second set was a battle between the two talented squads. WNCC led 10-7 after two Tsvetanova points only to watch EWC’s J’Adore Hayes get three points to put the Lancers back in front 11-10.

EWC led 12-11 before Cordero hit another kill and then served four points for a 16-12 lead. WNCC went up 19-13 after two Holleigh Jaime points and won the second set 25-18 on an Alex Hernandez ace serve.

EWC came out inspired in the third set, jumping to a 3-1 lead after two Przulj points. Th eLancers went up 13-8 as Przulj had four more points. WNCC came back to cut the Lancer lead to 13-12 on three Tsvetanova points.

EWC responded as they led 18-15. Schaub hammered a kill and Fukamota served five straight points to put WNCC up 21-18. The Lancers didn’t quit as they came back to cut the Cougar lead to 21-20 and then 22-21. That was when Cordero hammered down another kill and Tsvetanova served the final two points for the 25-21 third set win.

WNCC had plenty of offense in the win. Cardona finished with a double-double of 12 kills and 11 digs. She also had four points. Schaub finished with 10 kills while Kaohi had nine kills and seven digs.

Also for the Cougars, Angel Nahinu had two kills; Laura Ferrao had a kill and a point; Jolleigh Jaime had two digs, three set assists, and three points; while Fukamoto had 10 digs and 12 points.

WNCC, 20-5, will be back in action Friday when they host Otero Junior College in a South Sub-region contest.

EWC, falls to 11-10 and will hit the road for two North Sub-region contests when they face Western Wyoming Community College on Friday and Casper College on Saturday.

“We are going to be back in the gym tomorrow practicing again,” Tsvetanova said. “We still have a lot of things to fix before Otero because they are a really good team. I think it will be a really good match.