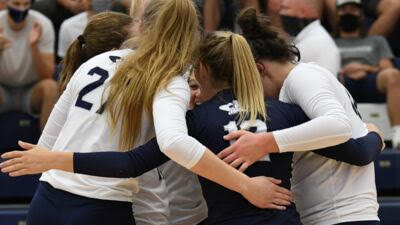 SEWARD, Neb. – A trend of breaking new ground continues for the Concordia University Volleyball program. For the first time in the program’s history, the Bulldogs have cracked the top 10 of the NAIA Coaches’ Top 25 Poll. Head Coach Ben Boldt’s squad landed at No. 10 on Wednesday (Feb. 3) in what was the first NAIA volleyball poll release of the 2020-21 season. This marks a four-spot jump from where Concordia ended last season (14th).

In an unusual two-part season, the Bulldogs are a month away from their first official match of the second semester. During the fall portion of the campaign, Concordia went 12-3 (all conference matches) and placed third in the GPAC regular-season standings. Based on the top 25 poll, the Bulldogs own three victories over nationally-ranked foes: No. 14 Dordt and No. 20 Midland (twice). Concordia will also play top 25 opponents in No. 12 Bellevue University and No. 7 Grand View University (Iowa) this March.

Three regular-season matches in March will lead up to the GPAC tournament quarterfinals on April 3. Dates for the proceeding rounds are April 7 for the semifinals and April 10 for the championship. The NAIA national tournament will get started on April 17 with the opening round. For the complete schedule, click HERE.