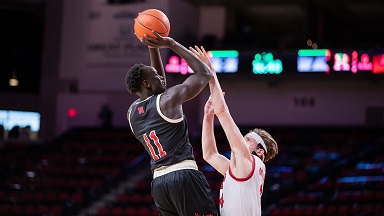 Behind a career-high 25 points from Lat Mayen, Nebraska put together its most complete effort of the season in a 72-51 win over Rutgers Monday night at Pinnacle Bank Arena.

Mayen scorched the nets, hitting 9-fo-11 from the field, including 5-of-7 from 3-point range, as Nebraska led wire to wire. He had 20 of his points in the first half, as the Huskers raced out to a 43-25 cushion.

Mayen was one of three Huskers in double figures, as Derrick Walker posted a career-high 14 points and six rebounds, while Trey McGowens added 12 points and five assists.

The Huskers’ 21-point lead is the largest margin of victory over a conference opponent since they defeated the Scarlet Knights by 24 on Jan. 6, 2016.

Jacob Young led the Scarlet Knights with 12 points on the night while Ron Harper Jr. added 10.

The Huskers close the regular season on the road, next meeting No. 5 Iowa in Iowa City on Thursday. Tip is set for 8 p.m. (CT)