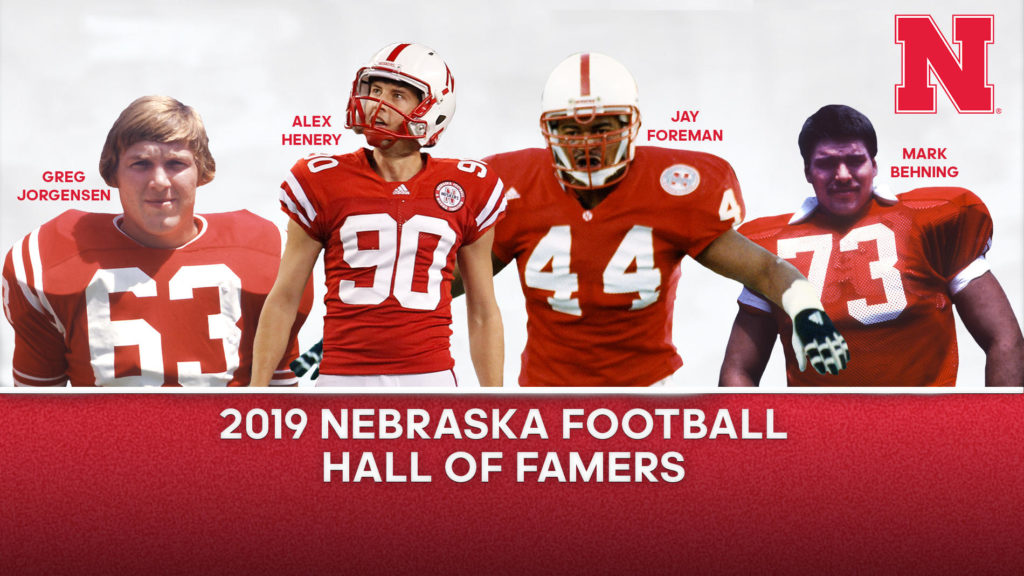 One of the most accurate kickers in college football history, Alex Henery, and three-time national champion linebacker Jay Foreman headline a class of five players, including four Huskers, and one state college coach to be inducted into the Nebraska Football Hall of Fame in September. Henery, a four-year starter for Nebraska from 2007 to 2010, hit on an NCAA-record 88.9 percent (68-76) of his field goal attempts during his career. He also scored a Nebraska-record 397 points by adding 193-of-194 career PATs. Henery, whose 68 career field goals were also a school record, earned first-team All-America honors for the Big Red as a senior in 2010. The Omaha Burke High School graduate went on to a four-year career in the NFL.

Foreman, who was a Butkus Award semifinalist as a senior at Nebraska in 1998, was a major contributor on Nebraska’s 1997 national championship team. He also helped the Huskers claim the 1995 title as a freshman after redshirting in his first season in Lincoln in 1994. Foreman finished his Nebraska career with 233 tackles, before going on to eight highly productive seasons in the NFL. He starred on defense with the Bills, Texans, Giants and 49ers, finishing his pro career with 527 tackles and five fumble recoveries.

A pair of All-Big Eight offensive linemen from the 1970s and 1980s join Foreman and Henery with a call to the hall. Mark Behning, a three-year contributor at offensive tackle on some of the most prolific offenses in Nebraska history in 1982, 1983 and 1984, earned Hall of Fame induction with his All-Big Eight honors as a senior in 1984.

Behning went on to spend three seasons in the NFL with the Pittsburgh Steelers. Greg Jorgensen, a starting offensive guard for Coach Tom Osborne’s early Nebraska teams in 1975, 1976 and 1977, was a second-team All-American in 1977 and a two-time All-Big Eight choice.

The four former Huskers will be joined in their inductions into the Hall of Fame by University of Nebraska at Kearney wide receiver Richie Ross. Ross, a two-time All-American, rewrote the UNK record books with 279 receptions for 4,882 yards and 50 touchdowns for the Lopers from 2002 to 2005. The four-time Rocky Mountain Athletic Conference selection’s record-setting efforts throughout his UNK career included a 317-yard receiving game against Fort Hays State as a sophomore in 2003, when he was named the RMAC Offensive Player of the Year. The Lincoln High graduate also earned a spot in the NFL with the Tennessee Titans.

The Hall also will recognize Tom and Patty Hastings of Omaha with its Clarence E. Swanson Meritorious Service Award, while long-time Nebraska Athletic Department administrators Butch Hug and Shot Kleen will be honored with Lyell Bremser Special Merit Awards. The Nebraska Football Hall of Fame is sponsored by the Nebraska Chapter of the National Football Foundation and College Football Hall of Fame.

The College Football Hall of Fame opened its headquarters in Atlanta in 2014. Players are not eligible for the ballot until after a 10-year waiting period from the end of their collegiate careers. Major national award winners earn automatic induction. Active NFL players are not on the ballot. This year’s Nebraska Football Hall of Fame class will celebrate together with an induction dinner on the University of Nebraska campus on Friday, Sept. 13. The class will be introduced prior to Nebraska’s football game with Northern Illinois at Memorial Stadium on Saturday, Sept. 14.