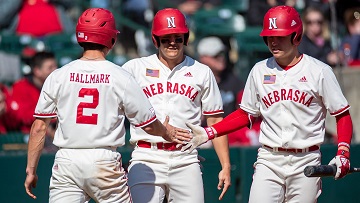 The Nebraska baseball team will play a 44-game, conference-only schedule, as announced by the Big Ten Conference on Wednesday, Feb. 17. With all 44 games counting as conference games, the Big Ten also announced that there will be no 2021 Big Ten Tournament, which Omaha was slated to host in May.

The 13-week schedule consists of five, four-game weekends and eight, three-game weekends. Each team is scheduled to play every other conference team at least three times.

The Huskers open the season with two weekends at neutral sites. The first of these neutral site events will take place in Round Rock, Texas, starting on Friday, March 5. At Dell Diamond Stadium, Nebraska will play a four-game series against the Purdue Boilermakers. The following week, Nebraska will head to Minneapolis, Minn., to play two games each against the Iowa Hawkeyes and Ohio State Buckeyes at U.S. Bank Stadium.

Following two neutral-site weekends to start the season, Nebraska then heads to Iowa City Week 3 for a three-game series with the Hawkeyes before returning home on Friday, March 26 for the start of a four-game series against the Minnesota Golden Gophers. Nebraska other home series are against Maryland, Rutgers, Northwestern and Michigan.

The schedule also includes two pod weekends where the Huskers will play two road games against the host school and two neutral games against another conference foe. The Huskers’ first pod weekend starts on May 7 when NU travels to Rutgers and will play both the Scarlet Knights and the Indiana Hoosiers. Two weeks later the Huskers head to Bloomington, Ind., where again they will play the Hoosiers and also the Ohio State Buckeyes.

The exact schedules for the weeks that consist of four-games will be announced at a later time.

Nebraska’s 2020 season was canceled on March 12 due to the pandemic. In the first year under the direction of Will Bolt, the Huskers posted a 7-8 record against a schedule that featured seven games against teams from the Big 12 and Pac-12 conferences.