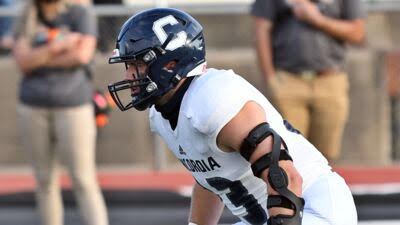 SEWARD, Neb. – When it comes to Concordia University Football, senior linebacker Lane Napier is in a class all by himself. Napier now owns the distinction as the only Bulldog in the GPAC era to earn first team all-conference accolades all four seasons. Napier was one of nine Concordia players to garner recognition on the 2020 All-GPAC football teams announced by the conference on Wednesday (Dec. 23).

A native of David City, Neb., Napier found himself onto the first team despite missing three games due to injury in 2020. When healthy, Napier was as productive as usual in a season that saw him rack up a team high 54 tackles to go along with three tackles for loss and a sack. With 14 tackles in the season finale at Dakota Wesleyan, Napier surpassed 400 tackles for his career. His four-year stat line also includes 34 tackles for loss, 10.5 sacks, seven pass breakups and an interception. Napier was selected as a 2018 NAIA First Team All-American by the Associated Press and has twice been tabbed an honorable mention All-American by the American Football Coaches Association.

As a redshirt sophomore, the Crete High School product Weyand moved into a starting role in the backfield. In seven games played this fall, Weyand accumulated 625 rushing yards and nine touchdowns on 146 attempts (4.3 yards/carry). Weyand made big waves early in the campaign when he rattled off 177 yards and five touchdowns in the overtime win over Hastings. He was subsequently named the NAIA National Offensive Player of the Week. Weyand also ran for 169 yards and two touchdowns in the victory over Doane.

A native of Davenport, Neb., and alum of Bruning-Davenport-Shickley High School, Schardt emerged as arguably the conference’s top tight end in 2020. He finished the season with 25 catches for 430 yards and three touchdowns. He enjoyed the breakout game of his career when he reeled in seven receptions for 132 yards and two scores at Northwestern. Over the final five games of the season, Schardt caught at least five passes in each outing. Schardt’s career totals stand at 40 receptions for 684 yards and four touchdowns.

Koehlmoos, who hails from Pilger, Neb., provided a consistent deep threat. He was one of three GPAC receivers with 25 or more catches to average more than 20 yards per reception in 2020. Koehlmoos recorded 25 receptions for 533 yards and three touchdowns on the year. His season included three 100-yard receiving games. Koehlmoos added 589 yards on kick returns for a total of 1,129 all-purpose yards this fall. In three seasons as a Bulldog, Koehlmoos has collected 91 catches for 1,399 yards and eight touchdowns.

Robinson III (Houston, Texas) and Schlepp (Manhattan, Kan.) played a major role in the significant improvement displayed by the offensive line as a whole in 2020. Robinson started all eight games at center while Schlepp made seven starts at right guard. With their work up front, Concordia nearly doubled its rushing yards per game average compared to the previous season. The Bulldogs also boosted their scoring average by 6.3 points from 2019 to 2020.

A native of Waverly, Kan., Mitchell has been rock solid on the back end of the defense in two years as a starter. While starting all eight games in 2020, Mitchell made 25 tackles, including 1.5 for loss. He also broke up seven passes, recovered a fumble and blocked a kick. Mitchell also earned second team All-GPAC honors in 2019 when he notched a team high five interceptions. Mitchell owns 59 career tackles to his credit.

Hammons, who calls Columbus, Neb., home, led the team with five sacks while battling through injuries this fall. Hammons recorded two sacks in the 23-3 win over Jamestown and was named the GPAC Defensive Player of the Week. He also posted two sacks in the victory over Briar Cliff. In his collegiate career, Hammons has produced 50 tackles and 7.5 sacks. At fullback, Stout earned notoriety this fall after Barstool Sports dubbed him “America’s Fullback.” The native of Grand Island, Neb., mostly did the dirty work as a blocker and caught one pass for 11 yards.