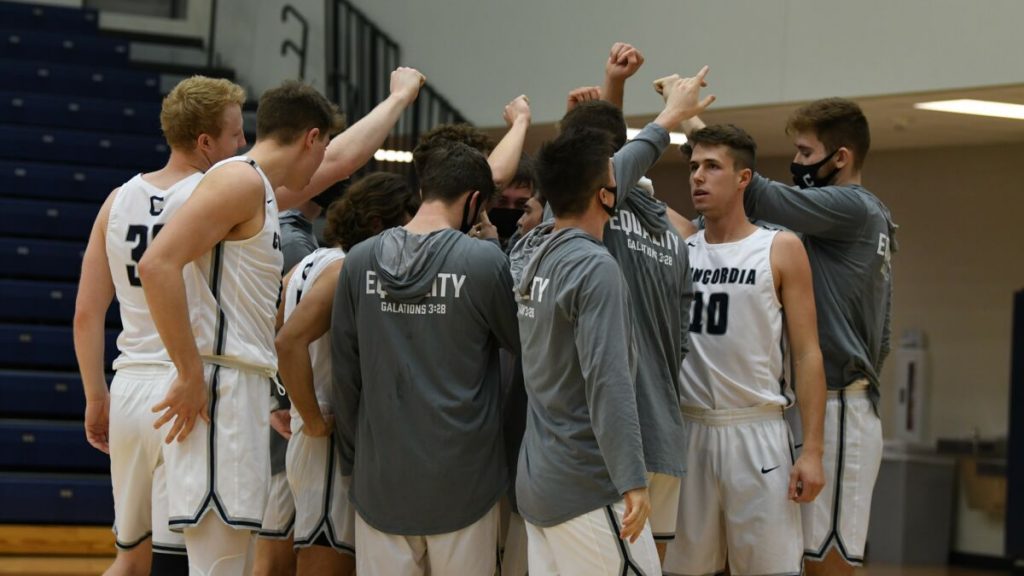 SEWARD, Neb. – The Concordia University Men’s Basketball team capitalized with big runs in both halves to dispatch Mount Marty 82-71 on Wednesday evening. The hosts busted out of the gates with a 12-0 run to start the game and a 13-0 run to start the second half to aid their efforts in the 11-point victory.

Head Coach Ben Limback’s squad did not trail once during the contest. The Bulldogs (9-2, 6-1 GPAC) have now won 11-straight matchups inside Friedrich Arena.

“Anytime you can get a victory in this league, it is huge,” Limback said. “We talked earlier this year about defending our home court and we certainly did that tonight.”

Junior Gage Smith scored the first six points of the contest during Concordia’s 12-0 run to open the game. However, Mount Marty shot back with a 13-3 run of its own to make things tight in the early going. The Bulldogs, however, were able to get good looks while shooting 45.9 percent in the rest of the first half to expand their lead to 11 points at the break.

Sam Scarpelli, Ryan Holt and Justin Wiersema hit three straight shots from behind the arch to spark the Concordia run in the second half. The Bulldogs led by as many as 23 in the second half before Mount Marty mounted a comeback to get to within nine with under three minutes remaining. The Bulldogs were able to fend off the Mount Marty comeback and notch the victory by putting the Lancers away at the charity stripe.

Unselfish ball movement played a significant role in the Concordia win as the Bulldogs notched 21 assists on 28 made field goals. Scarpelli led the passing efforts, dishing out seven assists. While the trio of Wiersema, Smith and Grant Wragge each pitched in three assists apiece.

Wiersema continued his scoring tear as he poured in 25 points while going 9-for-14 from the floor. Smith added his sixth double-double this season with 13 points and 13 rebounds. Holt also joined Wiersema and Smith by adding 15 points to the scoring efforts and just missed a double-double, finishing with nine rebounds.

Smith took a scary fall when he was undercut while going for a rebound toward the end of the game. The lower-body injury forced the Elizabeth, Colo., product to sit out the rest of the game.

“It looks like he just tweaked his ankle,” Limback said. “Gage is a tough kid and he is going to ice it. We will see where he is at as we get closer to Saturday.”

Overall, Concordia shot 43.8 percent (28-for-64) from the floor and 32.4 percent (11-for34) from behind the arch. Concordia won the battle on the glass as the Bulldogs pulled down 47 rebounds to the Lancers 26. Easy looks were at a premium for Mount Marty as Concordia limited the visitors to just 41 (25-61) percent shooting.

Concordia is still atop the GPAC standings, win the win as the Bulldogs are tied for first with Dakota Wesleyan (4-0).

The Bulldogs will be back on the road Saturday (Dec. 12) when they visit the seventh-ranked Morningside Mustangs for a 4 p.m. CT tip-off.