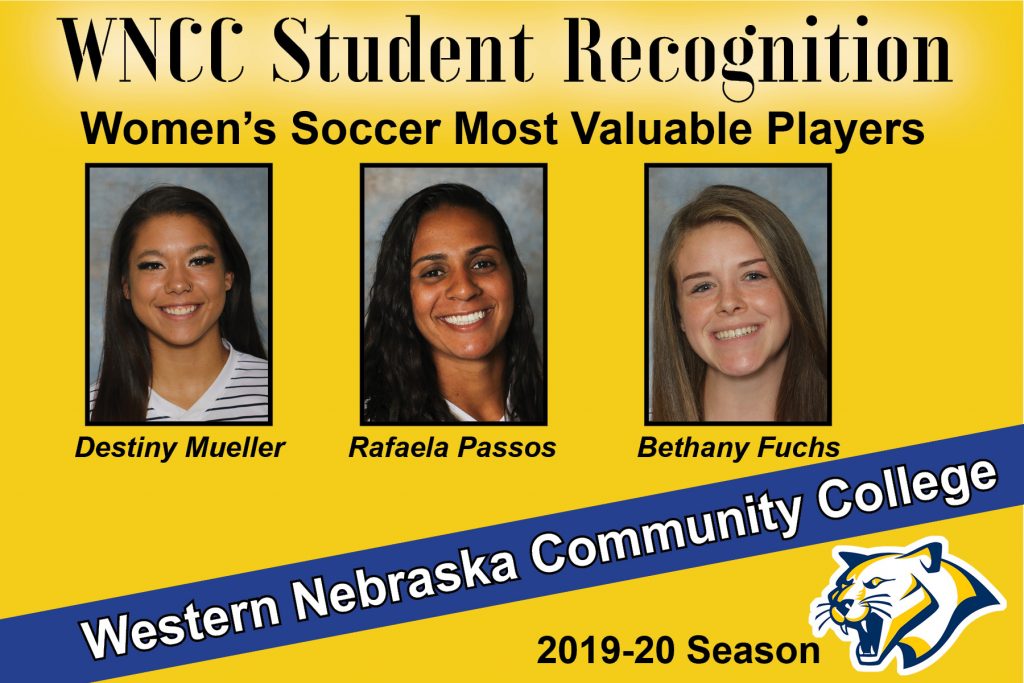 The three players performances on the pitch last year for WNCC helped the three earn MVP honors at the WNCC all-campus awards that was released last month.

One other women’s soccer player also earned an award at the WNCC all-campus award ceremony and that was Caroline Vieira, who was named one of five Unsung Hero Award winners. Vieira, a sophomore from Brazil, was an Unsung Hero recognition along with volleyball player Gabriela Canavati, softball player Sam Davis, baseball player Chandler Young, and women’s basketball player Yuliyana Valcheva.

The WNCC awards were held virtually because of the Covid-19 pandemic. The winners of the WNCC all-campus awards were derived from nominations from the WNCC community and then a committee sorted through the nominations.

MVP award winners Fuchs and Passos are both sophomores on the team. Fuchs is from Denver but has family in Scotts Bluff County, while Passos spent three years at WNCC from Brazil after red-shirting her first year because of an injury.

Mueller was a freshman on the team last year and came to WNCC from Gering. Mueller led the Cougars in scoring with nine goals last fall while Fuchs powered home eight goals as the Cougar women won 13 matches and finished the season with the second most wins in school history. The most wins came in the inaugural soccer season in 2003 when WNCC won 19 matches.

Mueller said the hard work that she put in during her high school career at Gering is paying off. Mueller was not only a four-year starter on the soccer team, but was a placekicker for the Bulldog football team.

“Getting a chance to be one of the MVPs means a lot to me,” she said. “All the years and hours I spent playing the game I love are paying off.”

For both Fuchs and Passos, they had to deal with injuries their first year at WNCC. They fought through those injuries and earned MVP honors in their final year as a Cougar. Both have signed to continue playing at the four-year level with Fuchs heading to Concordia University in Seward while Passos is headed to Bethel University in Tennessee.

“I’m very humbled to be recognized as one of the MVPs,” Fuchs said. “Personally, I felt like I really stepped it up from my freshman year to my sophomore year. I faced a major injury my freshman year and after what I went through, I was determined to not let anything get in my way or stop me this time around. I wanted to score goals, I wanted to leave it all on the field, I think I did exactly that.”

Passos, being the captain that she was, said this award is not hers along, it is her teammates, too.

“I feel really honored to be MVP and I am very happy with this accomplishment,” she said. “But, I know this wouldn’t be possible without my teammates. I confess I was a little surprised with this award but I know I helped my team on and off the field.”

While Fuchs, Passos, and Mueller earned MVP honors, Vieira was surprised at being named Unsung Hero. It is an honor for Vieira that shows how important working hard at many things pays off.

“I am really amazed by winning this award because I see all my value,” Vieira, a sophomore from Brazil, said. “I see the reward for all my efforts the past two years. Truly, I am grateful for this recognition among the other athletes [that was named Unsung Hero] because we can show that it is totally possible to keep high levels in both college and in sports matters at the same time.”

Vieira was active not only in the college setting but was a vital soccer player. Vieira was on the President’s list with a perfect 4.0 GPA in the fall semester. Besides being involved in soccer, she worked at the bookstore, was a Residence Life assistant, was on the Resident Life Council, and helped form the FCA group that started this last year.

“I would say that I had many achievements and I grew up a lot in those years at WNCC,” Vieira, who signed to continue her soccer playing at Cumberland University, said. “I am always grateful for all the staff and members who supported me through this journey. I believe that the key to success is staying focused. A student’s life is not easy. An athlete’s life is just as complicated. Then, being a student-athlete is a really hard task. However, putting your focus in the right goal is the key. We must focus to be able to stay on top in these two aspects in our lives. It’s not easy, but not impossible either.”

All the players that received awards and even those that didn’t were vital to the outstanding season the Cougar women’s soccer team had. Just like Fuchs did in stepping up in her sophomore year, so did her teammates in having one of their best seasons since the inaugural season.

“Just as I stepped it up from my freshman year to sophomore year, so did the team and the new incoming girls,” she said. “I believe that we had a successful and winning season in that we all came with a fire lit under us and a hunger to win. We wanted more for ourselves; we wanted to show that we are better than the efforts we previously gave. I’m proud we made it to regionals and I hope the girls can go even further this coming Fall! I wish them nothing but the best.”

Mueller added that the season they had was because of the way the team was a family, so the MVP honor is like a family award.

“The kind of year the soccer team and I had was amazing,” she said. “We all accomplished a lot together and got far along the season together and become a family.”

For Fuchs and Passos, though, they didn’t get those final games together on the soccer pitch because of the coronavirus pandemic that halted springs sports March 12.

“It was disappointing not being able to finish out the spring semester with everybody,” Fuchs said. “I was really looking forward to the spring soccer season as my final send off before I transfer to Concordia and to get one last chance to travel with all the girls and guys. I wish I got the chance to say goodbye to everyone, but I know every single one of them is going to do great in whatever comes next for them. I look forward to seeing what everyone does.”

Passos said it was hard to finish the year away from her teammates and friends for the last two months of the season and school year.

“It’s hard to finish the year this way but something we have no control over,” she said. “Unfortunately, It wasn’t the way I wanted, but what matters is that I could finish strong with good grades, graduate, and get ready for my next challenge at Bethel University. I have this weird feeling though that I will be back to WNCC, see everybody, and that this is just a break. But the truth is that my time in WNCC is over and I’m really thankful for everything.”

Mueller, herself, was looking forward to playing one last time with the sophomores that meant so much to the team.

“To finish the year without my teammates and fellow students was hard because on days I did not feel like doing schoolwork they pushed me to be better,” she said.

Passos added that once a Cougar, you are always a Cougar.

“I just want to say thanks to everyone who helped me and supported me all these three years,” she said. “Everyone was so amazing to me and made me feel at home and comfortable. I will never forget this college and always will support them. One day who knows I may be back. Once a Cougar, always a Cougar.”