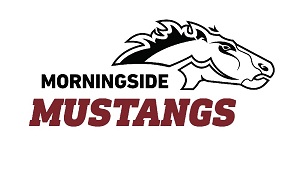 Junior Trey Brown (JR/Gretna, NE ) (Gretna, Neb.) made the most of a starting chance in the paint for head coach Jim Sykes‘ squad, recording a powerful double-double of 26 points and 11 rebounds that featured him hitting at a sizzling 78.5 percent clip. The junior post player was one of five Mustangs in double-digits in a tense Great Plains Athletic Conference thriller against crosstown foe Briar Cliff University.

The road to Mside moving to 10-0 overall and 5-0 in the league was paved with more stellar defensive play. It was especially key midway through the first half when an 18-14 deficit turned into a 33-21 lead behind a 19-3 run during which a lone three-point basket was all BCU posted on the Allee Gymnasium scoreboard.

Morningside, keeping pace with loop unbeatens Concordia University and Hastings College and fellow once-beaten Dordt University, didn’t waste much time getting out to a fast start. They scored 26 of the contest’s first 35 points as part of a 30-point opening 10 minutes and then held their crosstown GPAC foes to eight second period points.

A clash with top-ranked defending National Association of Intercollegiate Athletics’ Division II national champion the Concordia University of Nebraska is next on the Mustangs’ schedule. Game time is 6 p.m. Wednesday, Dec. 11.