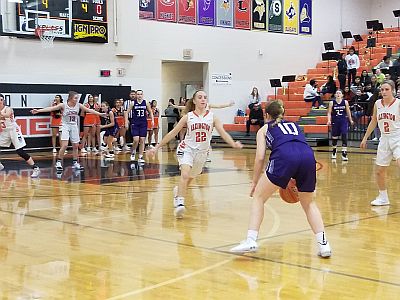 Minden’s Jenna Rowse scored 21 points including 13 in the second half to help the Whippets knock of Lexington on Tuesday night 41-39.  Rowse hit three three’s in the second half including a big one at the end of the third quarter that gave Minden a 34-29 lead. Lexington tied the game with less than a minute to play on a three pointer from Sarah Treffer the tied the game at 39. Treffer led the Minutemaids with 20 points.  Minden however would score on its final possession as Sarah Hultquist scored the game winner in the paint to give the Whippets the victory.  Lexington led by 11 in the first half but couldn’t maintain the lead as they lost their third straight close game to begin the year. Minden is now 2-1 on the season and has won 10 straight against Lexington.

In the boys game, Lexington cruised to an easy 74-31 win over Minden. The Minutemen shot a blistering 63 percent from the floor and were never really threatened. Six Minutemen were in double figures led by Eli Young and Nick Saiz who each had 12 points. Lexington improved to 2-1 on the season, Minden who was paced by Creed Ehlers with seven points fell to 0-3.