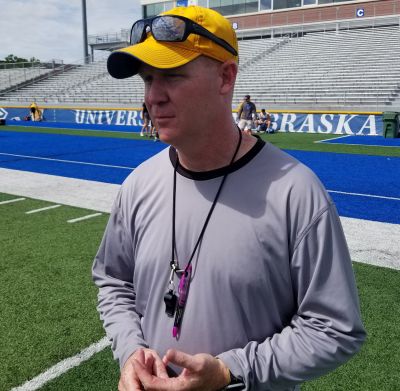 UNK Head Football Coach Josh Lynn has agreed to a new four year extension to remain as head coach of the Lopers through 2024. Lynn just guided the Lopers to a 7-5 season that included a victory in the Mineral Water Bowl in December. Lynn and his coaching staff took over a program that had won just one game in the previous two years before his arrival in Kearney. UNK won three games in his first season, five in his second and last year they broke through with a winning season that included a bowl victory

.”Coach Lynn has helped orchestrate a revival of Loper football, which once had a proud tradition. The success of the program can be attributed to Coach Lynn’s skill set and leadership, which makes him the right person to lead this program,” Bauer said. “We are proud of what he has accomplished, the direction the program is headed, and the transformation it has had on our community in such a short period. Not only has he led this program to success on the field, but the program has made a significant impact on our campus and community from a service standpoint.”

The new contract takes effect on February 1, 2020, and includes an annual salary increase with a bowl game now counting as a regular season contest. Lynn receives a bonus if UNK qualifies for the NCAA Division II playoffs or reaches eight wins.

“We are fired up!! My wife (Pam) and I love UNK, Kearney Public Schools  and the community. We have established some great relationships with the people throughout the community and at the University. We have started building something special here at UNK. The support of our Loper football alumni, boosters, faculty and the students has been incredible,” Lynn said.