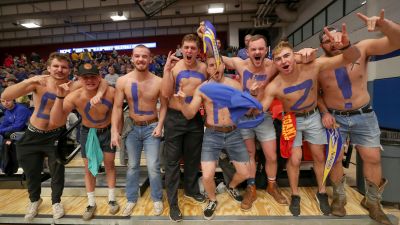 Brockton Sterling, fourth from left, and his Colorado School of Mines football teammates cheer for his sister, Bailee, and the Loper volleyball team at Saturday’s national championship. “We don’t mind being Lopers for a few hours this weekend. It’s been well worth it,” Brockton said. (Photo by Corbey R. Dorsey, UNK Communications)

DENVER – Those eight guys standing in the front row.

The shirtless ones wearing cutoff jean shorts, waving a UNK pennant and cheering on the Lopers at Saturday’s NCAA Division II volleyball national championship in Denver.

They weren’t University of Nebraska at Kearney students. Nope, those guys with the blue paint on their chests were football players from nearby Colorado School of Mines.

“We’re here for No. 23,” they shouted while entering the Auraria Event Center, where an amped-up group of about 700 UNK fans cheered loudly when they arrived.

No. 23 for UNK is Bailee Sterling of Kearney, a redshirt freshman on the Loper volleyball team. Her brother Brockton, who just finished his final football season at Mines, showed up with his buddies to support his sister.

Brockton graduated Thursday from Mines with a degree in mechanical engineering. At a graduation party following, he and his teammates decided to get painted up and support UNK in the national championship, played just 20 minutes away from the Mines campus.

“I walked in bragging about UNK and my sister being in the final four, and all these guys said if we made the natty they’d show out and help cheer her on,” Brockton said.

Bailee didn’t disappoint. After playing mostly a reserve role for the Lopers this season, she entered the first set of Saturday’s championship match and gave UNK a spark with a couple big kills and blocks.

He admitted that cheering with his buddies for UNK, a former Colorado School of Mines opponent in the Rocky Mountain Athletic Conference, felt a little strange.

“We don’t mind being Lopers for a few hours this weekend. It’s been well worth it.”

The bus ride covered more than 700 miles and lasted 11 hours.

“And it was worth every mile and every minute,” said UNK director of bands Duane Bierman.

Twenty-four members of the UNK pep band made the trip from Kearney to Denver on Saturday for the Lopers’ national championship match.

The band left Kearney at 11 a.m. Saturday and returned early Sunday at about 3:30 a.m.

“It was a long day for sure,” said Bierman, “but what an opportunity for all of us.”

An hour before the match started, band members huddled at one end of the court at the Auraria Event Center and let out a big cheer after a quick pep talk from assistant director of bands Brian Alber.

“That about sums it up,” said Bierman. “It’s a lot of fun to be part of a national championship event. It feels absolutely different than a regular performance. It’s a nice reward for our band to get to play in an atmosphere like this.

“We always do our best to bring extra energy to the games and get behind the team.”

UNK sophomore Zac Dibbern, a saxophone player from Brighton, Colorado – about 20 miles northeast of Denver – described the days leading up to the match as “one incredible hype train.”

“We were so ready to come out here and support the team,” he said. “It really has ignited a fire in us.”

“I’ve been at this a long time, and I’ve had to wait all these years to get to call a game like this,” said Jorgensen, whose broadcast career spans 25 years, including 22 with UNK’s radio partner KRVN.

“I appreciate this because I realize these moments, national championship settings like this, don’t come around often,” Jorgensen said. “I feel privileged to have a small part in documenting this season for UNK and Loper fans.”

One of the state’s most recognizable radio voices, Jorgensen called the title match one he’ll never forget.

“It’s been a pretty cool season. Just a really special group of coaches and players. It’s been a fun ride. One I’ll always remember.”

Last weekend, the UNK cheer squad was on the sideline at Tiger Field in Excelsior Springs, Missouri, as the Loper football team defeated Winona State University to win the Mineral Water Bowl.

Fayth Jackson, a junior from Lincoln, thought that experience would be tough to match. Then the UNK volleyball team advanced to the NCAA Division II national championship, putting the cheerleaders back on a big stage at the Auraria Event Center in Denver.

“It’s crazy because we’re actually doing this,” Jackson said Saturday en route to Denver. “This is a real national tournament. It’s so exciting. It’s probably one of the best things I’ve ever gotten to do.”

Jackson and several other cheerleaders were joined by the UNK pep band, fellow students and a handful of faculty and staff who packed a 56-passenger bus headed west to support the Lopers.

Raising Cane’s, a UNK Athletics sponsor, delivered combo meals to the hungry herd before they started the 11-hour roundtrip.

“We’re so proud of the athletes for all their hard work and dedication to this university,” Jackson said. “This really shows how much we support each other and how much we love each other.”

Brockton Sterling, fourth from left, and his Colorado School of Mines football teammates cheer for his sister, Bailee, and the Loper volleyball team at Saturday’s national championship. “We don’t mind being Lopers for a few hours this weekend. It’s been well worth it,” Brockton said. (Photo by Corbey R. Dorsey, UNK Communications)

The UNK cheer squad supported the Lopers Saturday during the NCAA Division II women’s volleyball championship at the Auraria Event Center in Denver. Fayth Jackson, front row, second from right, called the experience “one of the best things I’ve ever gotten to do.” (Photo by Corbey R. Dorsey, UNK Communications)