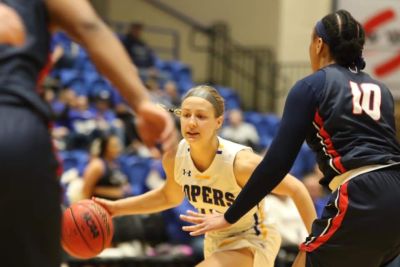 Kearney, Neb. – Sophomore post Brooke Carlson scored a team-high 21 points and sophomore guard Aspen Jansa was big off the bench to help No. 31/26 Nebraska-Kearney get past Rogers State, 74-59, Saturday afternoon at the Health & Sports Center.

Rogers (4-23, 2-16) falls to 0-13 on the road but put up a tougher than expected fight as they got big efforts from reserves Samariah Thompson and Darian Jackson, grabbed 12 offensive rebounds and hit eight threes.

“Rogers played pretty well today. I didn’t think we played great in the first half especially defensively. We gave up some things that were maybe a little bit easier than what we would’ve wanted,” UNK head coach Carrie Eighmey said. “But I think in the third quarter we fought a little bit and then in the fourth we made a good run.”

UNK closed the first quarter on a 9-0 run to open up a 17-7 lead but both teams tallied 33 points over the next 20 minutes. The Hillcats trailed by just a 39-35 margin with 4:12 left in the third quarter before Carlson hit back-to-back buckets in the lane. After Jackson tallied one of her six baskets UNK ended the quarter on a 7-3 run that featured a three by Jansa (Wahoo).

“Aspen and Trinity (Law) came in and gave us really good minutes in the second half. They both did some good things and Aspen gave a really big boost just when we needed it,” Eighmey said.

The Lopers finally put away Rogers by starting the fourth on a 13-5 run. This stretch was highlighted by two buckets by Jansa and two more from Iowa starting sophomore forward Maegan Holt. Rogers did go 3 of 5 from behind the arc in this quarter but it was too little too late.

“We were finally able to get some stops, got to the free throw line and had some really good offensive possessions. We were able to execute and get some easy stuff,” Eighmey said.

Carlson (Elkhorn) continues her torrid offensive play, scoring 21 for a second consecutive game and pushing her double digit streak to 10 in a row. She made 9 of 16 shots and also pulled down seven rebounds.

Jansa had all 10 of her points in the second half and reached double figures for the seventh time this winter. Two of those efforts came vs. RSU as she went 3 of 5 from the field and 3 of 3 at the line today. Next Holt went for 14 points and seven rebounds with South Dakota sophomore guard Klaire Kirsch at 10 rebounds, seven points, five dimes, three blocks and a steal.

Rogers saw Thompson, a 5-7 sophomore guard, tally a game-high 22 points thanks to 9 of 18 (2 of 5 threes) shooting. She reached her tally in 31 minutes and also had three boards and two assists. Next Jackson finished with a double double (14 points & 11 rebounds) with another reserve, guard Julie Luna, having nine points in 19 minutes of work.

Kearney, Neb. – The No. 37/23 Rogers State Hillcats had four starters score in double figures to hold off a furious Nebraska-Kearney rally, 78-66, Saturday evening at the Health & Sports Center.

Rogers (22-5, 14-4) has now won 11 of its last 12 games, improves to 8-3 on the road and avenges a 62-58 to the Lopers back in January. The MIAA newcomers came in ranked seventh in the NCAA Central Region and in second place in the league standings.

“They came out like a team that’s ranked second in the conference and trying to salt away an at-large berth for the NCAA Tournament. We came out ice cold. We couldn’t buy a basket and it showed and then it eventually started to show on the defensive end,” UNK head coach Kevin Lofton said. “I challenged the guys at half to be the team we’ve talked about being all year long, the one that we’ve shown all year. They responded and made it interesting in the second half.”

RSU, going 22 of 24 at the line, led 40-16 at the break and 48-18 with 16:57 left to play. That’s when the tides turned as UNK outscored the ‘Cats 37-11 over the next 14 minutes. Back-to-back triples from Bellevue redshirt freshman left reserve Cedric Johnson capped the long run and brought the Loper faithful to its feet.

The Hillcats and Lopers exchanged a couple of buckets with Johnson apparently nailing another three, this time from the left corner, to make it 63-60 with just over three minutes left. However UNK was called for a charge and Johnson’s three was waived off. Rogers salted things away by going on a 6-0 run to push its lead back into double digits.

“We found a way to get the ball to go in (in the second half), particularly from the three-point line. Hitting nine threes in a half is going to help your cause a little bit,” Lofton said. “I thought we defended at times a little bit better. We got some turnovers and that led put us into transition.”

Out rebounding UNK 31-25 and having a 36-18 advantage in paint points, RSU was led by senior guards Marques Sumner (21 points, three boards, two assists and two steals) and Tavian Davis (13 points, six assists, three boards and one steal). Sumner had one of RSU’s four threes with Davis having a couple of key buckets down the stretch.

Utah junior guard Jake Walker paced the Lopers as he made 9 of 10 free throws to score 19. He also hit two of UNK’s nine threes. Next Juhl (12) and Winchester (11) reached double figures with Johnson and Alliance junior forward Austin Luger combining for 10 points, four boards and an assist coming off the bench.

“I’m proud of the guys for how they hung in there and at least gave themselves a chance,” Lofton said.