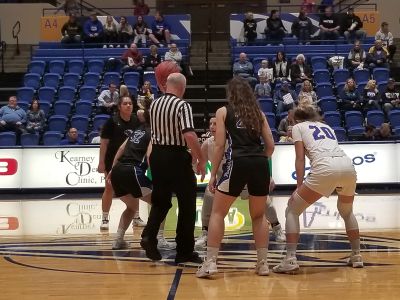 Kearney, Neb. – Sophomore forward Elisa Backes tied her career-high of 18 points and freshman forward Madison Dreckman got close to a triple double to help Nebraska-Kearney roll past York College, 90-31, Monday night at the Health & Sports Center. This was the start of a weeklong home stand for the Lopers (8-1). UNK makes up the postponed Central Christian (Kan.) College game on Thursday at 5:30 p.m. and then battles Manhattan Christian (Kan.) College on Saturday afternoon. “We’re going to continue to work on things we need to get better at. After playing two MIAA games (last week) you kind of see what things you need to improve on,” UNK head coach Carrie Eighmey said. “For us defensively there’s some things we wanted to get better at … we wanted to control the ball a little better. We’re trying to use every experience, whether it’s a practice or a game, to get ready for the second half of the season.”

Leading from the opening tip to the final buzzer, UNK shot 54% (35 of 65) from the field, was plus 14 on the glass, got 56 bench points and tallied 24 points off of 20 Panther turnovers. This was an exhibition game for York (1-11). Coming off the bench Backes (Salina, Kan.) reached her point in just 20 minutes and was 7 of 10 from the field and 3 of 3 from the line. She scored 18 points last season vs. Manhattan Christian and at Southwest Baptist. Next Dreckman (Le Mars, Ia.) made 5 of 7 shots (3 of 3 threes) to reach her offensive output while also grabbing nine rebounds and having six dimes. She logged a team-high 24 minutes in coming off the bench. “Elisa and Madison have both been getting better and better. I thought they did some really good things tonight. One of those things is their versatility … they were both knocking down threes, they both were scoring in the paint, and both were able to hit some midrange jumpers. When you have players of that size that can score at all three of those levels it makes them pretty tough to guard,” Eighemy said. Finally for the Lopers starting sophomore post Brooke Carlson (Elkhorn) had 12 points and five boards with freshman forward Adrienne Falk (Pleasanton) at six points in 10 minutes of work.