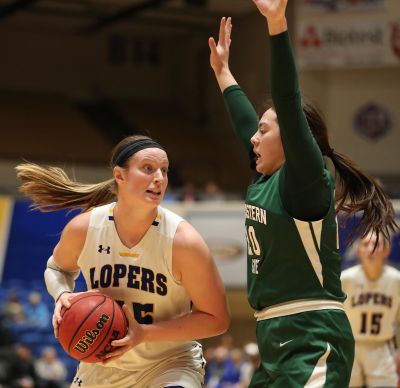 Kearney, Neb. – Sophomores Brooke Carlson and Klaire Kirsch combined for 38 points to help No. 31/26 Nebraska-Kearney pull away from Northeastern State, 82-64, Thursday night at the Health & Sports Center. UNK (24-3, 13-3) is now in sole possession of second place in the league standings as Newman stunned Emporia State (19-6, 12-4) tonight in Wichita, 68-67. The Lopers are at NU (10-16, 5-12) next Thursday. To avoid a similar fate against NSU (5-19, 3-14), the Lopers saw Carlson (Elkhorn) and Kirsch (Rapid City, S.D.) both fall a point short of tying their career-highs. UNK also was plus nine on the glass in the second half and held the RiverHawks to 37% shooting (24 of 65). “They are a team that always plays hard and their shooters shot the ball well today. That makes you a little bit concerned,” UNK head coach Carrie Eighmey said. “We made some adjustments defensively in the second half and our players did a good job of taking away the easy stuff that I thought we gave up early.” Klaire Kirsch While NSU trailed for all but 16 seconds they hung around thanks to 12 offensive rebounds and big nights from guards Celina Hayes and Shae Sanchez. Hayes went for 27 points, eight rebounds and four assists with Sanchez tallying 17 points, seven boards and two assists. However NSU tallied only 11 fourth quarter points and surrendered 50 points in the paint.

“Offensively we found ways to manufacture points. We didn’t necessarily shoot the ball great from the three-point line but we got to the foul line and in the second half we made those free throws,” Eighemy said. “It was a game where had to get enough stops and then get paint touches because they started today with a fairly small lineup.” A 5-0 spurt gave UNK its first double digit lead of the night, 56-46, late in the third quarter. A corner three by freshman reserve guard Trinity Law (Brandon, S.D.) finished the mini-run and NSU didn’t get closer than seven points the rest of the way. The Lopers went 8 of 8 at the line in the fourth and stretched the lead to 70-57 after a steal and layup by Kirsch. She was limited to just three first half minutes due to foul trouble but made up for lost time by scoring 13 of her 17 points after the break. “Klaire gave us good energy in the second half. She made a couple plays defensively where she was able to get steals and turn them into easy buckets,” Eighmey said. “She did a good job of attacking the rim and gave us a nice boost.” In double digits for a ninth straight time Carlson scored a team-best 21 points thanks to 8 of 11 field goal shooting. Also sinking five freebies she grabbed eight boards and had two assists.

Next Kirsch finished 7 of 13 from the floor while also grabbing eight rebounds with Iowa sophomore wing Maegan Holt (10) the other Loper in double figures. Hayes reached her big point total by making 11 of 21 shots (4 of 12 threes) with Sanchez 5 of 15 from the field. Starting post Zaria Collins (10) was the other NSU player to reach double digits. UNK hosts Rogers State (4-22, 2-15) Saturday afternoon. The Hillcats have lost three in a row after a 100-59 setback at Fort Hays State tonight.

Kearney, Neb. – Senior guard Kendrick Thompson scored 25 points and Northeastern State sunk 11 three pointers to down Nebraska-Kearney, 75-64, Thursday night at the Health & Sports Center. NSU (17-9, 10-7) avenges an 83-79 OT loss to the Lopers (15-10, 9-7) earlier this year and also picks up its sixth road win. This marks UNK’s second home defeat in 13 outings. The RiverHawks came in averaging nine made threes per game and almost had that by halftime as they went 8 of 15. Thompson (4 of 8) and 6-7 redshirt freshman reserve Daniel Dotson (3 of 3) did the most damage as NSU built a 38-23 lead. UNK, meanwhile, went 1 of 15 from behind the arc and also saw the NSU bench score 21 first half points. “You have to give it to Northeastern State. They came in focused and offensively they played extremely well in the first half. They hit eight threes, something we were trying to take away from them but they found ways to get open. Some of those were tough shots,” UNK head coach Kevin Lofton said. Cedric Johnson A full-court press helped whittled down the deficit to nine early in the second half but the ‘Hawks stretched it to 62-40 with 7:40 remaining. However UNK still made things interesting as a few shots fell and the pressure forced several ‘Hawk turnovers. Bellevue redshirt lefty Cedric Johnson made 1 of 2 free throws to make it a seven-point hole, 66-59, by the 3:36 mark. Thompson responded with one of his eight buckets and then UNK missed again from long range. They finished 6 of 33 from the three point line (16 of 27 from inside the arc).

“Defensively we have to better than we were in both halves tonight. Offensively we have to be able to hit the open shot when we get it from the three-point line. But we also can’t forget we’re an inside-out team and we did not attack the paint anywhere as much as we should have in the first half,” Lofton said. “Second half they went zone, squeezed the paint and made it hard for us to get anything inside. And then outside we didn’t respond very well.” Beginning his career at Division I Longwood (Va.), Thompson made 8 of 18 shots (4 of 10 threes) and went 5 of 10 at the line to reach his game-high point total. Seven others scored include double digit efforts by reserves Brad Davis (12) and Aaron Givens (10). NSU, making 24 of 48 field goals, got an astounding 41 points off its bench. UNK had three in double figures in Kansas senior Morgan Soucie (20), Utah junior Jake Walker (15) and Bellevue senior AJ Jackson (12). Soucie and Jackson combined to go 12 of 21 from the floor while also grabbing 13 rebounds and drawing 11 fouls. Finally Texas senior lefty Chase Winchester had nine points, four boards, and three assists. The Lopers host nationally-ranked Rogers State on Saturday afternoon. The Hillcats (21-5, 13-4) downed Fort Hays State tonight, 74-68, to move into second place in the MIAA.