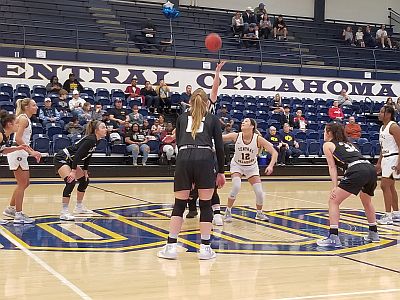 Both teams were a bit short-handed today as UNK point guard Haley Simental (Pueblo West, Colo.) logged just eight minutes and UCO guard Micayla Haynes sat out to illness/injury. To avenge a 75-59 loss to the Lopers earlier this year UCO went 22 of 25 at the line, tallied 16 points off 11 UNK turnovers and limited Kearney to a 5 of 24 effort (21%) from behind the arc.

“It was a one-point game at half (UCO 33-2) and I thought we had a chance there in the second. We’re just making mental errors right now,” UNK assistant coach Devin Eighmey said. “We got refused on some ball screens. We thought about doubling (Johnson) but we also didn’t want them to get going from the three-point line.”

A transfer from Division I Texas-Arlington, Johnson had just 12 points (5 of 6 field goals) in the first meeting but reached 26 today thanks to 9 of 12 shooting. She also went 8 for 8 at the line, grabbed four defensive rebounds, recorded two steals and handed out one assist.

“We had 54 (shot) attempts and only three offensive rebounds. We talked that about at half … we just have to buck up a little bit. Haley is (not 100 percent) but that doesn’t mean we’re not capable of getting it done,” Eighmey said. “We had some lapses in the fourth quarter where we made some individual mental errors. That stuff gets you beat late in games.”

Trailing for 34 minutes on the day UNK led 42-37 midway through the third quarter. An 8-0 Loper run was capped by a bucket by Iowa sophomore wing Maegan Holt. However that was Kearney’s biggest lead of the day as UCO quickly responded with its own 8-0 spurt.

Things were tied at 52 with 6:19 left when UCO used a 10-3 run to put things on ice. This stretch featured two Johnson jumpers and 4 for 4 free throw shooting by the ‘Chos. UNK did have a chance to make it a 64-62 with about a minute left but a 15-foot jumper found iron instead of net.

“Usually if we keep teams at 65 or below we have a good chance of winning. But we only scored 61 … we were 5 of 24 from three. They were stuck in the paint and that was part of it,” Eighmey said. “At some point you have to get in the paint and I don’t think we hunted it. If you’re not making shots the margin of error gets really small. We competed and have had a great regular season so not all is lost.”

Now 16 of 70 from the three-point line over the last four games, UNK got another double double by South Dakota sophomore Klaire Kirsch (12 points & 10 rebounds). Her season total of 245 rebounds puts her eighth on the Loper all-time season list. Next Elkhorn sophomore post Brooke Carlson made 6 of 8 shots to tally 14 with Wahoo sophomore reserve guard Aspen Jansa at six points, six boards in a season-best 30 minutes of work.

Besides Johnson UCO got 11 points apiece from the starting backcourt of Brooke Rayner and Shatoya Bryson. 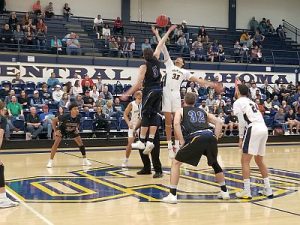 Kearney, Neb. – The Central Oklahoma Bronchos closed on a 14-2 run to slip past Nebraska-Kearney, 68-64, Saturday evening in Edmond.

The Lopers came in 0-7 all-time in Edmond but were poised to snap that streak and snag the fifth seed in the league tourney. A jumper by junior guard RJ Pair (The Colony, Texas) made it 62-54 at the 3:05 mark and capped a 9-1 run.

However the fortunes for both teams changed quickly as UNK’s last six offensive possessions resulted in a bucket, two turnovers and three missed shots. UCO scored in its final seven possessions, going 5 of 6 at the line and making all four shots it took. Redshirt freshman guard Carson Calavan rebounded his own missed free throw with nine seconds left with the score 66-64. He made it a two possession game with two more freebies.

“We didn’t execute well enough down the stretch. We had our opportunities and it starts defensively. If we had just buckled down once we got on top of them that at the end that could’ve sealed it away,” UNK head coach Kevin Lofton said. “Offensively you wish you could have a couple of those plays back. Maybe draw up something better.”

Playing 17 minutes off the bench Calavan scored seven of his nine points over the final 3:05. Starting guard Cam Givens also was big down the stretch, sinking a three and a layup to finish with nine points as well.

UCO took advantage of a small UNK squad as Kansas senior forward Morgan Soucie missed a second straight game due to injury and then Bellevue senior forward AJ Jackson fouled out with just over seven minutes remaining. That led to the ‘Chos having a 33-23 advantage on the glass and 32 paint points.

“They made a handful of plays and we didn’t. When you lose a game and it’s that close that’s what it really comes down to,” Lofton said.

Pair led UNK with 15 points, his second double digit effort. He made five shots, including three treys, in logging 31 minutes off the bench. Next Bellevue redshirt freshman Cedric Johnson had 14 points to tie a season-high with Utah junior guard Jake Walker netting 10 on three made buckets and two free throws.

“They have a lot of length around the boards and they were getting to the basket. At times we did a good job of keeping them off the glass but just didn’t do enough at the end,” Lofton said. “RJ really stepped up and tried to bring it home for us and Cedric stepped up and had a nice stretch there.”

Besides Calavan and Givens getting hot late UCO saw reserve D.J. Basey and starter Dashawn McDowell score 13 apiece. McDowell went 9 of 10 at the line with the ‘Chos finishing 26 of 31 as a team.