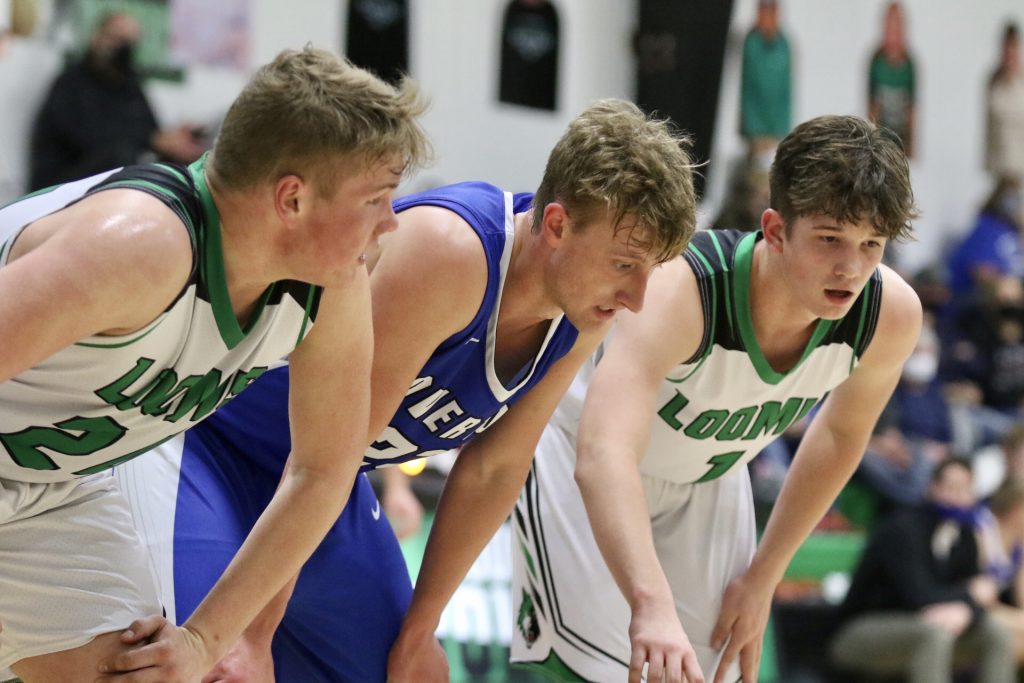 LOOMIS – The Loomis Wolves controlled the contest from start to finish against Overton, as the Wolves earn their 15th win on the season and move into the Fort Kearney Conference Tournament semifinal round winning 76-35. Click here to listen to the broadcast.

In one of the first contests of the high school basketball season, Loomis handed Overton a 74-15 loss, and much of the same continued on Tuesday night. The game opened up with Loomis off to a fast start as Aiden Lovitt dropped a three pointer, while Shay Swanson and Quinn Johnson continued their offensive momentum they have carried all season with 6 and 9 points respectively in the first quarter. Overton hung around, only trailing by 9 at the end of the first, as they had Caleb Svarvari hit a triple and Braden Fleischman adding four points. Cody Shurbert and Wyatt Ryan both added two points, but Loomis held their lead 20-11 at the end of the first.

Johnson picked up his pace adding 8 points in the second quarter, as 6 other Wolves added 13 points combined in the quarter. Overton was shut down with only 8 points, as Loomis led 41-19 leading into halftime.

Aiden Perry added three triples in the second half as many reserves saw action for both sides, as the Wolves scored 20 or more points in the first three quarters to earn their 76-35 victory at home.

Loomis improves to 15-2 on the season and will face off against #4 Ansley-Litchfield on Friday evening at the Viaero Event Center in Kearney for the FKC semifinal round. That contest can be heard on 880 KRVN and 106.9 FM in Kearney with pregame starting at 5:50 PM. The #1 seeded Wolves had contributions from Johnson with 22 points, Swanson added 13 points, Lovitt finished with 14 points, Perry had 12 points all from three pointers, Christian Blincow added 6 points, 3 points were tallied by Wes Trompke, and Clay Meyer and Gabe Kimball both finished with 2 points.

Overton falls to 3-16 on the season as they prepare to close out their regular season with road tilts against Wilcox-Hildreth, SEM, and Gibbon. The Eagles had contributions from Kaedan Wallace with 7 points,  Ryan had 7 points, Fleischman tallied 6 points, Svarvari had 5 points, Preston Shively and Alex Banzhaf each had 4 points, and Shubert finished with 2 points.