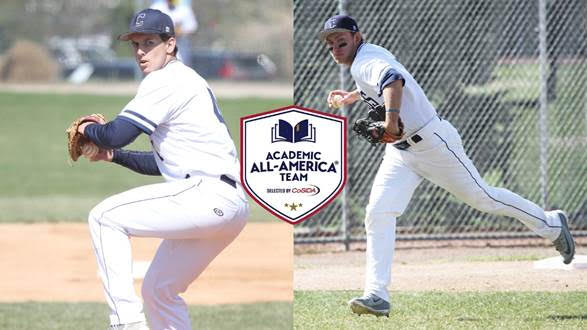 SEWARD, Neb. – Junior pitcher Nick Little and senior infielder Thomas Sautel have been named to the 2020 Academic All-America® NAIA Baseball Team, as announced by College Sports Information Directors of America (CoSIDA) on Monday (June 8). Back on May 14, Little, Sautel and sophomore Jesse Garcia were each chosen as CoSIDA Academic All-District® Team selections. The three All-District honors were a program record for Concordia University baseball.

The CoSIDA Academic All-America® Baseball Teams have been released to recognize the nation’s top student-athletes for their combined performances athletically and in the classroom. For more information about the Academic All-District® and Academic All-America® Teams program, please visit http://cosida.com. Due to the shortening of the 2020 season, career statistics (and cumulative grade-point averages) were considered for these honors.

As a sophomore in 2018, Little was also honored by CoSIDA as both an Academic All-District and All-America selection. He has now accomplished that same feat in 2020. Named the 2018 GPAC Pitcher of the Year, Little was on track for another big season this spring. In four 2020 starts, the native of Lithia, Fla., went 4-0 with a 1.32 ERA and 35 strikeouts in 27.1 innings. He fired a seven-inning no-hitter against Waldorf (Iowa) on Feb. 29. Over 188.2 career collegiate innings, Little owns a 2.96 ERA and 156 strikeouts and sports an impressive 19-5 record. Little is a business administration major.

Sautel did not have the fortune of a full senior season, but he made a considerable impact upon the program after transferring in via Indiana Wesleyan. Also an NAIA Scholar-Athlete, Sautel played in 93 career games at Concordia and hit .333 with a .408 on-base percentage and .461 slugging percentage. He also totaled 14 doubles, two triples, six home runs and 59 RBIs. The native of Littleton, Colo., garnered second team All-GPAC accolades in 2018 when he hit .371. Sautel earned a degree in business administration from Concordia. He achieved a 4.0 grade-point average as a graduate student who also received his master’s in business administration.

Prior to this season, Little (2018), Jake Adams (2017) and Jaydee Jurgensen (2015) represented the program with CoSIDA Academic All-District accolades. As an institution, Concordia Athletics has landed four individuals on CoSIDA Academic All-America teams in 2019-20.