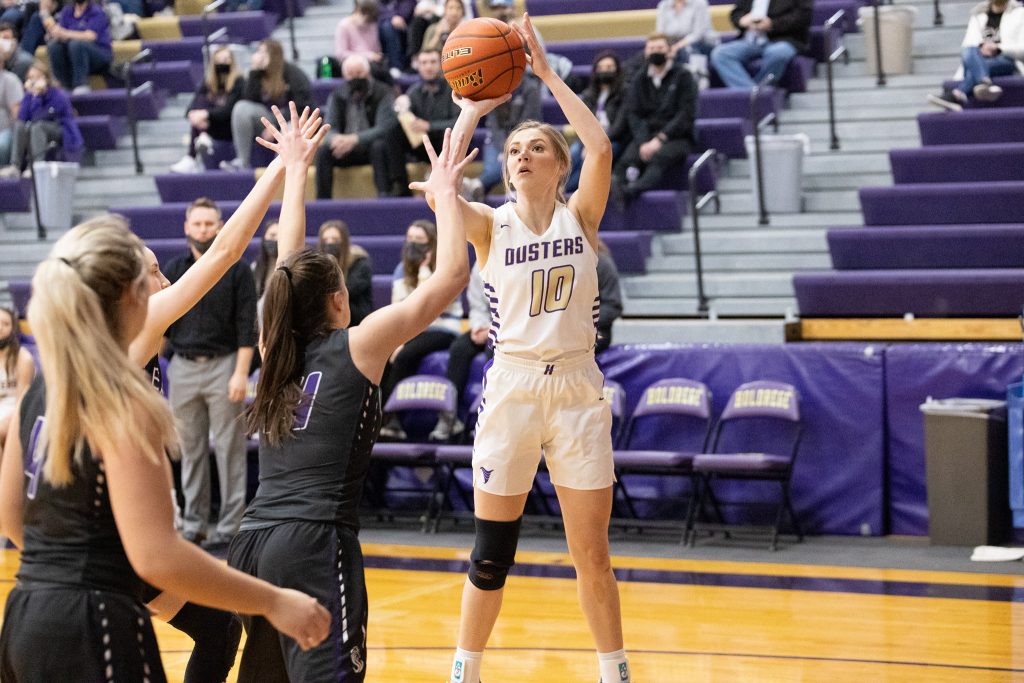 HOLDREGE – The Lady Dusters were tested early and often by an upset-minded Southern Valley squad, but eventually pulled away and escaped with a 47-42 victory. Click here to listen to the broadcast.

Holdrege came into the contest looking for their first back-to-back win since mid-December. The game started off hot for Southern Valley however, as they found success from beyond the arc as triples dropped from Ann Bose and Kynlee Marquez. Marquez continued her offensive start with four more points in the quarter. Once Holdrege took the opening shot from the Eagles, the Lady Dusters quietly fought back into the game with Alexis Bliven finding an open look from downtown and hitting a three pointer while adding a lay-in later in the quarter. Holdrege faced a 10-8 deficit to start the second quarter.

After giving up a short scoring run to Bose, Holdrege found more opportunities from inside and outside; Bliven hit two more three pointers in the quarter while senior Taylor Wiser dished assits to Mallory Pfeifer inside and Brooklyn Berney for a mid range jumper.  Megan Belgum also benefited from some open looks, adding 7 points in the quarter. Before Holdrege could truly shut down Southern Valley, the Eagles hit three pointers from Krista Best as both teams were locked at 25 to enter halftime.

The third quarter saw Holdrege began to show their defensive prowess, holding Southern Valley to 8 points and outscoring them as a team by 6. Avery Hurlbert added a three pointer and Pfeifer found more confidence inside adding four points. Belgum and Bliven added triples, while the Eagles saw their offensive rhythm stifled as Bose was held to two points. Marquez did pick up some of the pace adding four, but Holdrege entered the final quarter up 39-33.

A six point lead was the largest of the night for the Dusters, as Southern Valley began the fourth quarter on a mission. Two points were added by Bose, and Brianna Quinn heated up for back-to-back three point scores for Southern Valley. Holdrege saw their lead dwindle to one possession, but maintained their lead and never looked back adding another four from Pfeifer and two from Bliven. McKenna Ortgiesen closed the contest, hitting both free throws in a one-and-one opportunity at the end of the final moments, allowing the Dusters to breath and earn a 47-42 victory at home.

Holdrege improves to 6-4 on the season. The Dusters saw contributions from Bliven with 17 points, 12 points added by Pfeifer, Belgum contributed 10 points, Hurlbert had 4 points, and Ortgiesen and Berney both added two points. Holdrege returns to home for a Saturday afternoon tilt against Hershey; that game can be heard on KUVR.

Southern Valley falls to 5-8 on the season. The Eagles had 14 points from Bose, 11 from Marquez, 8 points contributed by Quinn and Best, and 1 point tallied by Jenna Hunt.