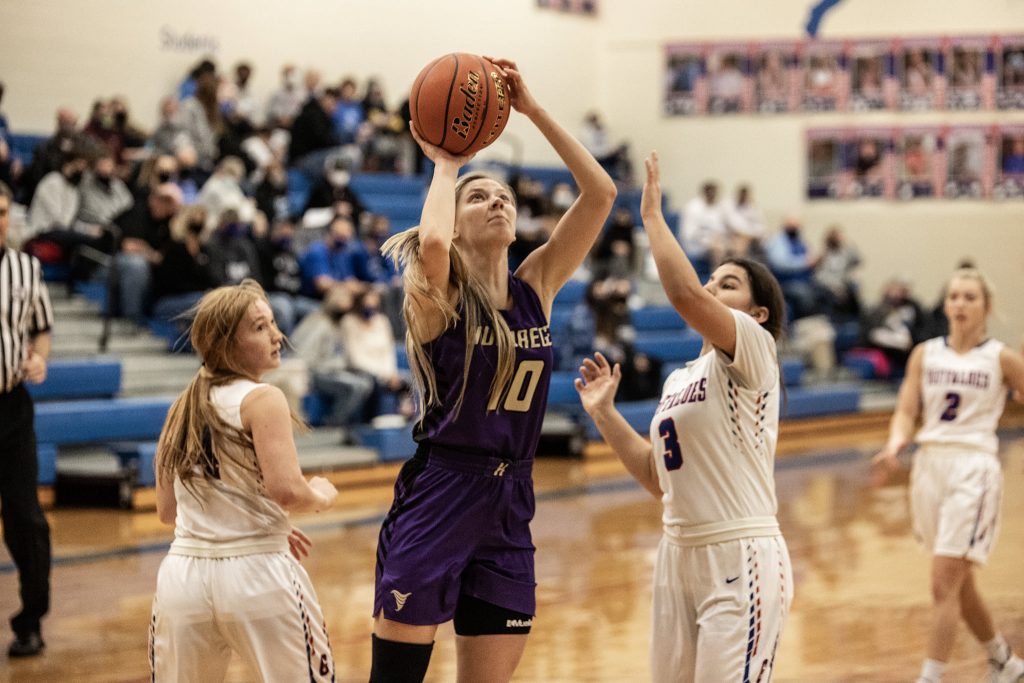 GIIBBON – The Holdrege Lady Dusters started Saturday night’s contest with the goal for breaking the school record in points allowed in a contest and successfully earned their 50-7 win on the road, smashing the record in the process. Click here to listen to the broadcast.

Holdrege came off an impressive defensive performance the night before, holding Broken Bow to 30 points in a loss on the road. Head Derek Runcie made it a point of emphasis before the contest that he wanted his team to continue to be a dominating defense, and it showed early at Gibbon.

The Dusters did not allow a single point in the first 11 minutes of play, as Gibbon was held scoreless utnil the 5 minute mark of the second quarter. Holdrege did take some time to find their own offensive rhythm however, as  Mallory Pfeifer hit a jumper inside followed by Alexis Bliven’s two points and a drive into the lane by Megan Belgum added the first scores of the first quarter. The defense continued to find momentum, as extra possessions were found after steals by Bliven who also added another two points at the free throw line, as well as Avery Hurlbert contributing a point to close out the first. Dusters led 9-0 at the end of the first eight minutes.

Gibbon would have some offensive success in the second quarter, as they scored all of their 7 points for the contest. Yahyda Castaneda hit a three pointer with 5 minutes to go in the first half, but Holdrege had already tallied numerous scores coming from Belgum and Bliven, as the two traded between leading scorer with every possession. Gibbon was able to add another three pointer from Aleah Onate, and Lindsay Wilkens added a free throw, but Holdrege blew by Gibbon with a 16-7 second quarter advantage and lead 25-7 at halftime.

The success continued for Holdrege in the second half as the Dusters held Gibbon scoreless for the following 16 minutes of play while adding another 25 points in the half. Other players got involved in the scoring as Taylor Wiser hit back-to-back three pointers in the fourth quarter and Bliven added 9 points in the final quarter as well to lead all scorers. Holdrege earned their record finishing the game with a 50-7 victory.

Holdrege improves to 5-4 on the season as they prepare for their return home, with back-to-back contests against Southern Valley and Hershey. The Lady Dusters saw contributions from Bliven with 19 points, Belgum added 11 points, Wiser contributed 6 points, Brooklyn Berney tallied 5 points, Pfeifer had 4 points, Ella Roach and McKenna Ortgiesen added 2 points each, and Hurlbert added 1 point.

Gibbon falls to 0-9 on the season and saw contributions from Castaneda with 3 points, Onate also added 3 points, and Wilkens tallied 1 point.