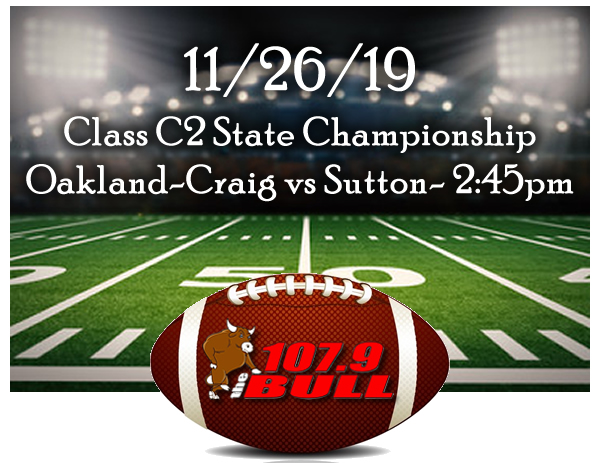 LINCOLN – It will be a clash of run-based offenses and stout defenses when the 12-0 Oakland-Craig Knights meet the 11-1 Sutton Mustangs for the Class C2 state football championship on Tuesday, November 26 at Memorial Stadium in Lincoln.

The Knights boast the more balanced offense of the two teams, averaging 117.9 passing yards per game along with 333.9 rushing yards per game. Whereas Sutton has only completed four passes in the playoffs, and the Mustangs haven’t even attempted 50 on the entire season.

“We feel that we’re probably a little bit more balanced than they are,” Oakland-Craig coach Joe Anderson said. “They’ve only thrown the ball fifty times all year, so it’s definitely something that they don’t really wanna do, but with the athletes they have back there you can’t just sell out to stop the run, because they’ve definitely got guys that can make some plays.”

In terms of points and overall scoring, the edge would go to Oakland-Craig, with the Knights averaging 50.9 points per game this season, compared to 38.6 for Sutton.

When talking play-makers, it’s a multi-faceted rushing attack for Oakland-Craig, with Jaron Meyer rushing for 1,037 yards and 12 touchdowns, along with Ian Lundquist going for 759 yards and 18 scores, and Coulter Thiele adding 568 yards and nine TDs, not to mention four other players who had rushed for over 200 yards this season.

Colton Thomsen has been very reliable at QB for the Knights, completing 67 of 104 passes for 1,204 yards and 14 TDs, compared to just three interceptions. Thiele has been his favorite target with 21 catches and seven touchdowns, with Caden Nelson adding 19 catches and five scores. And we can’t forget about big tight end Wyatt Seagren who has caught 13 passes and two scores.

For Sutton, Jackson Perrien enters the championship game with 1,941 rushing yards and 24 TDs, while QB Wiseman has 1,523 yards and 21 TDs. And when you’re not focusing on them, fullback Cory Carlson adds 458 yards and four scores.

Both teams have been stellar on defense too, with the Knights only allowing 10.9 points per game all season, compared to 12.9 for the Mustangs.

“You know, I think the biggest thing has been our assignment defense,” Sutton coach Steve Ramer said. “Making teams drive the football. If they’re willing to go twelve, thirteen plays and drive the ball, we’re willing to allow that to happen and chew the clock and shorten the game and it works to our advantage as long as our offense can answer.”

Anderson says the key for the Knights is focusing on the game, and not the hype surrounding it.

“Right now preparation just has to be the thing. Obviously there’s a lot of excitement in town, there’s a lot of distractions and things like that. But we just gotta block all that out and treat this like any other football game,” Anderson said. “Yeah the stadium’s gonna be a little bit bigger, and the atmosphere is gonna be a little bit different, but once that whistle blows, we told our kids we gotta be physical. We gotta lock in to knowing our assignments and doing our jobs.”

At 12-0 heading into the title game, Oakland-Craig is one game away from accomplishing their team motto for the season.

“Our kids’ motto all year has been to ‘win 13,'” Anderson said. “They know they’re one step away from doing that.”

The Class C2 state football championship between 12-0 Oakland-Craig and 11-1 Sutton will be Tuesday, November 26 at 2:45 pm at Memorial Stadium in Lincoln.

The game will be broadcast on 107.9 The Bull with pregame coverage starting at around 2:15.