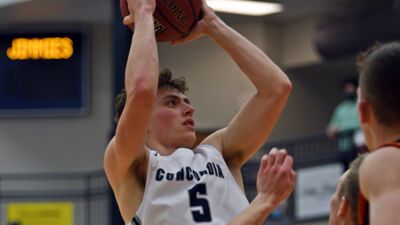 YANKTON, S.D. – Carter Kent wouldn’t let the Concordia University Men’s Basketball team fall on Wednesday (Jan. 13) night. The Crete native had all the answers for the Lancers, who clawed back within six points late in the contest before being put away. In the 86-76 win inside Cimpl Arena in Yankton, S.D., the Bulldogs shot 50 percent from the floor in the process of collecting their fifth GPAC road triumph this season.

Head Coach Ben Limback’s squad kept pace in a GPAC race that is tightening up at the top. Concordia improved to 13-6 overall and to 10-4 in conference play.

“I thought we came out ready and played really hard defensively,” Limback said. “Ryan Holt did some really nice things in the first half. We gave up a couple threes to some hot shooters, but other than that I thought we locked in on some of their key guys. They were denying us on the perimeter so we had to attack off the dribble a little bit more … Carter was special in that second half. You could see the game slow down for him.”

Four days after eclipsing 1,000 career points, Kent exploded for points in the second half in a clinical performance. Kent (10-for-17 from the floor and 4-for-6 from beyond the arc) scored in just about every way imaginable and put a cherry on top with a three-point play in the closing stretch. His 29 points represented a career high. Of course he had help. Three teammates reached double figures: Justin Wiersema (20), Gage Smith (15) and Holt (13).

Each of those aforementioned standouts played a role in a critical 11-2 run early in the second half. It was an impressive response after Mount Marty had drawn within three (48-45) and forced Limback to use a quick timeout. Lancer star Jailen Billings (22 points on 8-for-14 shooting) allowed his team to hang in it with his scoring prowess.

Limback enjoyed his team’s 9-for-19 shooting from 3-point range and its ability to respond to a Mount Marty basket, but his favorite play occurred when Wiersema dove for a loose ball. Said Limback, “We’re a team that hangs our hat on playing harder than the other team and bringing it every night. It was a great victory for our team.”

Wiersema extended his streak of consecutive games with at least 10 points to 21. He also grabbed eight rebounds. In addition, Holt, Kent and Smith each snared six or more rebounds in contributing to a 36-30 team rebounding advantage. The Bulldogs are now 6-0 when Smith scores at least 15 points.

The Lancers (7-11, 4-9 GPAC) made use of two recently eligible transfers in Cooper Cornemann and Tyrell Harper. Off the bench, Harper added 17 points and six rebounds. Mount Marty, which shot 46.0 percent (29-for-63), has dropped five-straight games. It lost the meeting in Seward, 82-71, back on Dec. 9.

The Bulldogs hope to end a series drought against Morningside (14-2, 10-2 GPAC) when the two programs meet up in Seward on Saturday. Tipoff is set for 4 p.m. CT from Friedrich Arena. The 15th-ranked Mustangs have won each of the last 10 matchups with Concordia, including the one that took place this season in Sioux City, Iowa, (86-64 score). Morningside defeated Briar Cliff, 89-73, on Wednesday.

Said Limback, “I think our guys are ready. We’re going to enjoy the bus ride home, but I’m sure a lot of us are going to be thinking about what to do that next game with Morningside. There are some guys who need some rest and recovery, but I love our bench right now. We have a lot of guys contributing and our guys are practicing hard even when they aren’t getting minutes.”