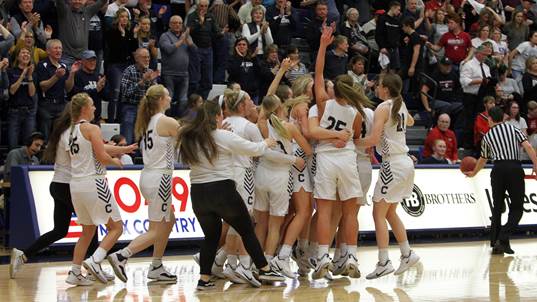 SEWARD, Neb. – The Concordia University women’s basketball program will begin the 2020 national tournament just the way it started the 2019 event – as the No. 1 overall seed up against the same first-round opponent, Wilberforce University (Ohio). The No. 1-ranked Bulldogs will take on Wilberforce at 10:15 a.m. CT on Wednesday, March 11. Concordia is fresh off sweeping GPAC regular-season and postseason championships for the fourth season in a row.

This will mark the 19th all-time national tournament appearance for the program and the 12th in head coach Drew Olson’s 14 years piloting the Bulldogs. Concordia will enter the tournament as one of the favorites along with the other No. 1 seeds in 2019 national title game opponent Southeastern (Fla.), Marian (Ind.) and conference rival Hastings.

“It’s definitely one of our goals (to repeat),” Olson said after Tuesday’s GPAC title game. “I know there’s a lot of really good teams. I like how we’re playing. I like our confidence and our focus. We’re really excited to go up there.”

Olson’s squad will never be at a disadvantage when it comes to experience at the national tournament. Six of the eight players to see action in last year’s national championship game victory will return to the Tyson Events Center in Sioux City, Iowa, with an eye on back-to-back titles. All-American Philly Lammers has helped power the program to at least the national semifinals in each of the past three trips to Sioux City. Lammers and Grace Barry (MVP) were both named all-tournament last season at the national tournament.

A storyline to watch for at the Tyson will be Lammers’ pursuit of the school’s all-time scoring record of 2,054 points held by Bailey Morris (2011-15). It’s not something the four-time first team All-GPAC honoree will focus on, but she may just get there in the process of trying to move her team along in the bracket. Lammers pushed her career point total to 2,019 after scoring a game high 21 versus Hastings. She made 9-of-11 shots from the floor as the most dominant player in that game.

No matter what happens the rest of the way, it will have been a remarkable run for a senior group that includes Barry, Colby Duvel, MacKenzie Helman, Taryn Schuette and Riley Sibbel. Over the past four seasons, Concordia is a combined 136-10 overall, 63-1 at home and 78-6 in GPAC regular-season games. There has never been a better four-year run of success in program history.

Wilberforce received an automatic bid to the national tournament for the second year in a row. Also nicknamed the Bulldogs, Wilberforce (19-11) placed third in the Association of Independent Institutions. The school is located in Wilberforce, Ohio, population of 2,271. A year ago, Concordia cruised to a 100-62 first-round win over Wilberforce. Lammers led the way with 16 points in that contest.

The Concordia/Wilberforce winner will advance to the second round and play either fourth-seeded Kansas Wesleyan or fifth-seeded Mayville State (N.D.) at 12 p.m. CT on Friday, March 13.

Five facts about Concordia at the national tournament

·        The Bulldogs enter the national tournament with the No. 1 overall ranking, just as they did a year ago. Concordia also appeared at No. 1 in the first three polls of the 2019-20 season before dropping back to third on Jan. 15. The Bulldogs have not dipped below No. 3 the entire winter. Six-straight senior classed have played every game of their careers with national rankings.

·        Olson became the program’s fifth coach to lead Concordia to the national tournament when he made his first appearance in 2008. Past coaches to take the Bulldogs to nationals were Todd Voss (three), Mark Lemke (two), Micah Parker (one) and Carl Everts (one). Voss guided two squads that reached the national semifinals.