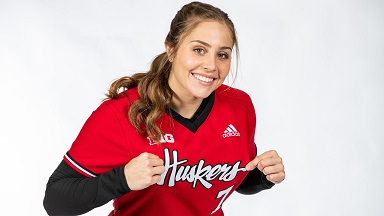 Down to her final strike, freshman Sydney Gray delivered a walk-off two-out, two-run single to left field to lift the Nebraska softball team to a 5-4 eight-inning upset of No. 23 Michigan Friday in the final game of a three-game series in Leesburg, Fla.

The freshman’s second hit of the day – and her first career game-winning hit – capped a comeback for the Huskers, who erased a one-run deficit four times in the game. Nebraska trailed 1-0, 2-1, 3-2 and 4-3 before Gray’s line-drive single delivered the win. The Huskers improved to 4-5 on the season with the victory and bounced back after losing twice to Michigan by a total of three runs on Thursday.

Gray finished 2-for-4 with two RBIs, tying her career high in hits and posting her first career multi-RBI game. Senior Rylie Unzicker, batting out of the leadoff spot for the first time this year, went 2-for-4 with a triple. She tied her career high with three runs and scored the tying run on Gray’s game-winning hit. Senior Tristen Edwards scored the winning run to cap a 1-for-2 afternoon that included an intentional walk and a sacrifice fly. Junior Anni Raley added an RBI double for the Huskers, while sophomore Brooke Andrews added the Huskers’ other hit and her freshman sister Billie scored Nebraska’s other run.

Junior right-hander Courtney Wallace (3-1) earned the win in relief for Nebraska. Wallace pitched the final 6.2 innings and allowed three runs (two earned). Freshman right-hander Kaylin Kinney made the first start of her career and allowed one run on two hits in 1.1 innings.

Alex Storako (3-2) took the loss for Michigan, which fell to 6-3 on the season. She allowed three runs (two earned) in 4.0 innings. Nebraska’s five runs tied for the most Michigan has allowed this season.

Michigan jumped out to a 1-0 lead in the top of the first. Lexie Blair led off with a single, moved to second on a wild pitch and advanced to third on a sacrifice bunt. She then scored the game’s first run on a second wild pitch.

Nebraska answered right back in the bottom of the first. Unzicker and Edwards began the inning with back-to-back singles. Unzicker moved to third on a fly out from senior Cam Ybarra, and then Unzicker stole home when Edwards was caught in a rundown between first and second. Edwards made it back to first base safely and a third single in the inning from Gray gave the Huskers runners on first and second with two outs, but they were left stranded there.

In the top of the third, Michigan scored a single run to retake the lead. Blair again got the rally started with a leadoff single. Another single and a throwing error put Wolverines on second and third for Lou Allan, who delivered an RBI single to give Michigan a 2-1 lead. Following a sacrifice bunt, Michigan had runners at second and third with one out, but Wallace prevented any further damage by retiring the next two hitters.

The Huskers used a two-out rally to tie the game in the bottom of the fourth. The first two batters struck out before illie Andrews won a long plate appearance by drawing a walk. She then came around to score on RBI double from Raley that tied the game at 2-2.

But for the third time in the game, Blair led off an inning with a single and started a rally in the top of the fifth. She promptly stole second, moved to third on a sacrifice bunt and came home on a sacrifice fly.

Trailing 3-2, Unzicker led off the bottom of the fifth with a triple, and she scored the tying run on Edwards’ sacrifice fly to center.

Michigan threatened to regain the lead in the top of the sixth. A one-out walk was followed by a single to give Michigan runners at first and second, but Wallace quickly retired the next two hitters.

After a scoreless seventh inning, Allan began the eighth inning on second base due to the tiebreaker rule. She moved to third on a sacrifice bunt and scored on an RBI ground out.

Unzicker began the bottom of the eighth on second base for Nebraska, and Michigan elected to intentionally walk Edwards to start the inning. Ybarra then flew out to right, moving Unzicker to third base with one out. Following a strikeout, Gray quickly fell behind 0-2 but fouled off several two-strike pitches before lining her game-winning hit to left.