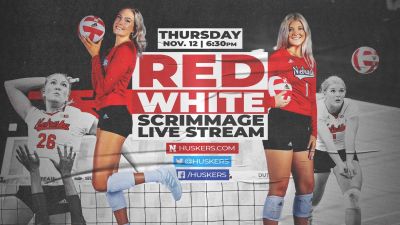 The Nebraska volleyball team will be holding a Red-White Scrimmage on Thursday, Nov. 12 at the Bob Devaney Sports Center. First serve is scheduled for 6:30 p.m. The scrimmage is closed to media and the public but it will be streamed live on Huskers.com, Twitter (@Huskers) and Facebook (/Huskers). John Baylor and Lauren (Cook) West will call the scrimmage. Baylor is in his 27th season doing play-by-play for the Husker volleyball program and West, a former All-America setter for Nebraska, will provide color commentary. Nebraska finished the 2019 season with an overall record of 28-5 and reached an NCAA Regional Final for the eighth straight season. No other program in the nation has an Elite Eight streak spanning the last eight years. Nebraska had no seniors on the 2019 squad and returns several key players in 2020 including All-Americans Lauren Stivrins and Lexi Sun. A two-time AVCA All-American, Stivrins averaged 2.55 kills and 1.07 blocks per set while hitting .374 in 2019. Sun led the Huskers last season with 3.57 kills per set on a .270 hitting percentage and added 2.45 digs per set with 25 service aces.

The Huskers also return Nicklin Hames, Kenzie Knuckles, Madi Kubik, Jazz Sweet and Callie Schwarzenbach. Hames was named an AVCA All-America honorable mention in 2019 after starting all 33 matches. The Huskers welcome several newcomers this season in Missouri transfer Kayla Caffey and freshmen Anni Evans, Keonilei Akana and Kalynn Meyer. Caffey spent three seasons at Mizzou but has two seasons of eligibility left after redshirting her first season in 2016. As a sophomore in 2019, the Chicago native ranked second in the SEC and ninth nationally with a .408 overall hitting percentage.