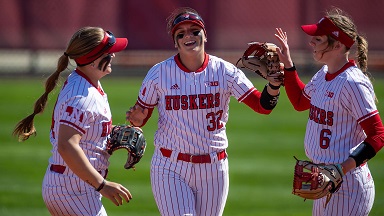 Lincoln – Senior right-hander Olivia Ferrell fired a three-hitter, allowing only one run to lift the Nebraska softball team to a 2-1 victory over Maryland in game one of Friday’s doubleheader at Bowlin Stadium.

Ferrell needed fewer than 90 pitches in her sixth complete game of the season. She allowed only three singles – including two infield singles – and struck out four while walking none. Behind her effort, Nebraska moved to 17-16 on the year. Trinity Schlotterbeck (6-6) pitched well in a losing effort for Maryland (14-19), allowing two runs on five hits.

Offensively, junior Anni Raley was 2-for-2 with a double, an RBI and she was also hit by a pitch. Freshman Billie Andrews homered, while her sophomore sister Brooke was 1-for-3, as was freshman Caitlynn Neal. Senior Tristen Edwards walked in each of her three plate appearances.

Nebraska jumped out to a 1-0 lead in the bottom of the first when Billie Andrews homered to center field with one out.

Maryland pulled even with a run in the top of the third. A leadoff double, a sacrifice bunt and a stolen base preceded a game-tying sacrifice fly.

The Huskers regained the lead in the bottom of the fourth. Edwards worked a leadoff walk and stole second. She then gave Nebraska a 2-1 lead on a two-out, RBI single from Raley.

Nebraska missed a chance to add to its lead in the bottom of the fifth. Neal led off with a double. After the next two batters were retired, Edwards was intentionally walked before senior Cam Ybarra lined out to center to end the inning.

The Huskers also stranded a pair of runners in the sixth, but it would not matter. Ferrell allowed a two-out single in the top of the seventh – snapping her streak of 13 consecutive batters retired – before wrapping up the win with a lineout.

Lincoln – The Nebraska softball team used a pair of two-run homers to erase a three-run deficit and rally for a 4-3 victory to complete a doubleheader sweep of Maryland Friday evening at Bowlin Stadium.

The Huskers trailed 3-0 heading into the bottom of the fifth inning, but freshman Billie Andrews hit a two-out, two-run homer to cut the lead to one. Two batters later, senior Cam Ybarra launched a two-run homer of her own to give Nebraska the winning margin. Andrews, who had two home runs in the doubleheader, finished 2-for-3, as did Ybarra. Freshman Caitlynn Neal, who doubled ahead of Andrews’ home run, was the only other Husker to produce as hit, as Maryland out-hit Nebraska 7-5.

Junior right-hander Courtney Wallace (8-7) earned the win, allowing only one earned run in 5.1 innings. Senior right-hander Olivia Ferrell picked up her second save of the season by tossing 1.2 innings of perfect relief.

Maryland jumped out to an early lead, using three hits to take a 1-0 lead in the top of the first inning.

The Terrapins then took advantage of a costly Husker error to score a pair of unearned runs in the third, stretching their lead to 3-0.

Nebraska’s first scoring chance came when it loaded the bases with one out in the bottom of the fourth on singles from Andrews and Ybarra and a Maryland error. But a strikeout and a fly out kept the Huskers off the scoreboard.

NU then broke through in a big way with its four-run fifth. Neal got things started with a one-out double off the fence in center. Then with two outs, Billie Andrews launched a towering two-run homer to left center to cut the lead to one. After senior Tristen Edwards was intentionally walked, Ybarra lined another two-run homer to right to put Nebraska on top, 4-3.

In the top of the sixth, Maryland had runners on first and second with one out before Ferrell entered and quickly retired the next two batters. She then pitched a perfect seventh inning to preserve the victory.

Nebraska and Maryland resume their four-game series with a single game Saturday at 3 p.m.