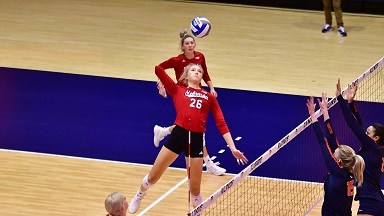 Madi Kubik had nine kills and a team-high 11 digs, while Kayla Caffey had seven kills without an error for a .636 hitting percentage to go with three blocks.

Nicklin Hames had 33 assists and eight digs, and she became the 10th Husker in school history to reach 3,000 career assists and the fourth to do so in the rally scoring era (2001-present).

The Huskers hit .282 on the night and held Illinois to .153. NU had a 47-35 advantage in digs, with Keonilei Akana contributing 10 and Kenzie Knuckles adding eight.

Nebraska had two aces and three errors, while Illinois put up five aces but had 10 service errors. The Huskers out-killed Illinois 44-36 and registered one more block (8-7).

The two teams will play again on Saturday at 6 p.m. at Huff Hall. The match will not be televised but will be streamed on BTN+ and can be heard on the Husker Sports Network.

Set 1: The Huskers won a back-and-forth first set, 25-23, out-hitting Illinois .231 to .194. The Huskers jumped out to a 3-0 lead with three straight kills, but Illinois answered with a 7-2 run to go ahead 7-5. The Illini block showed up with four blocks to propel Illinois to a 15-12 lead at the media timeout. But after a kill by Sun, Hayley Densberger entered and served four straight points that put the Huskers up 17-15. Sun had three kills and a block to spark the Big Red in that stretch. Illinois rallied to tie the set on five more occasions, but the Huskers never trailed again. With the score tied 22-22, Kubik terminated and an Illini error gave NU set point. Sun finished off the 25-23 win with her seventh kill.

Set 2: The Huskers never trailed in the second set in taking a 25-15 win and going up 2-0 in the match. Nebraska bolted to a 6-2 lead and pushed it to 17-9 after a four-point spurt keyed by kills by Kubik, Sun and Stivrins. Hames went off one foot for a kill before Sun gave the Huskers a nine-point lead at 19-10. An ace by Sun and kills by Caffey and Stivrins closed out the set. Nebraska hit .333 and limited Illinois to .135.

Set 3: Illinois held a 12-8 lead after a 4-1 spurt, but the Huskers chipped away with two kills by Sun and one by Kubik, and two blocks – including a solo stuff by Jazz Sweet – to tie the score at 14-14. The Fighting Illini rebuilt an 18-15 lead with a pair of kills by Terry and an ace. But Caffey earned sideout for the Big Red with her sixth kill, and a solo block by Stivrins cut it to one at 18-17. A service error and attacking error by Illinois on consecutive rallies tied the score at 19-19. After an Illinois timeout, Cooney terminated for the Fighting Illini, but a service error preceded a block by Stivrins and Sun that put Nebraska in front 21-20. Cooney committed another attacking error for a two-point Husker lead at 22-20, and Stivrins and Hames teamed up for another block before a kill by Sun gave the Huskers three match point chances at 24-21. Caffey finished the match at 25-22 with her seventh kill on an error-free night.