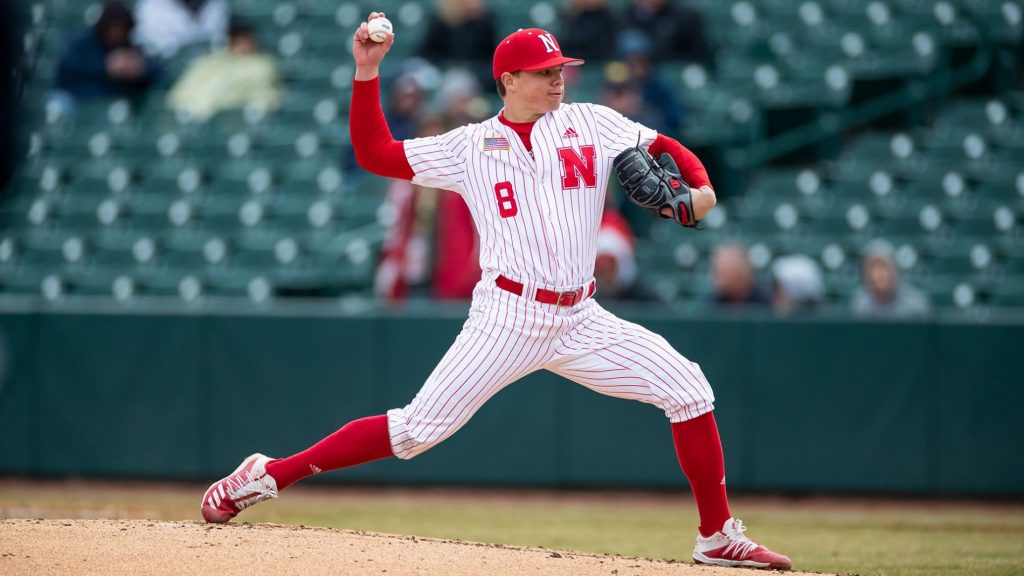 Round Rock, Texas – After falling in the bottom of the ninth in Friday’s season opener, the Nebraska baseball team swept a doubleheader from the Purdue Boilermakers on Saturday at Dell Diamond Stadium in Round Rock, Texas. Nebraska took game one of the day, 7-2, and dominated game two, 10-0, resulting in a run-rule victory after seven innings.

Junior Shay Shanaman was stellar in his first career start, striking out five over 6.0 one-hit shutout innings. The Grand Island native had an efficient afternoon, facing more than four batters in an inning just once and retired the Boilermakers in order three times. Caleb Feekin finished the shutout with a scoreless seventh, including two strikeouts.

Nebraska’s offense was led by a pair of freshmen, Brice Matthews was 2-3 with a double and four RBIs, while Max Anderson was 2-5 and now has eight hits and five RBIs in the series.

Nebraska’s offense jumped on Purdue’s starting pitchers in both games. In game one, Calvin Schapira lasted just 2.2 innings and in game two Nick Alvarado was tagged for seven runs (all earned) on six hits and five walks over 3.1 innings.

The Huskers used just two four pitchers over the two games, while Purdue sent seven pitchers to the mound on the day.

NU’s offense gave Shanaman a lead early with five runs in the second. Four Huskers recorded a hit in the inning, with the biggest coming with the bases loaded and two outs when Matthews lined a 1-1 offering from Alvarado down the left-field line for a three-RBI double. Efry Cervantes drove in the first run of the game earlier in the inning with a RBI single.

Matthews drove in his fourth run of the game in the fourth when is plated Jaxon Hallmark with a single and then later scored on a two-RBI single from Anderson. Nebraska pushed its lead to 9-0 in the fifth when a bases-loaded balk allowed Hallmark.

Nebraska hit double digits on the scoreboard in the top of the seventh with a sacrifice fly from Cam Chick that scored Hallmark, who scored five runs over the two games on Saturday.

The Huskers will go for the series win tomorrow morning in game four of the weekend, with first pitch set for 10 AM. Fans can watch the game on BTN+ or listen on the Husker Sports Network.