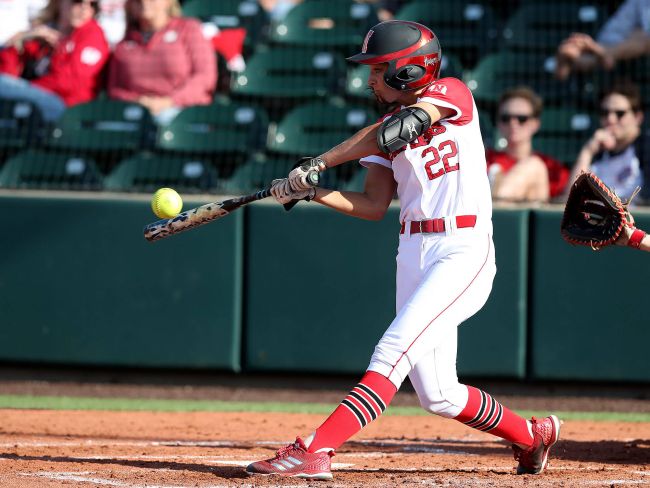 The Nebraska softball team swept Saturday’s doubleheader against Penn State to clinch a series victory over the Nittany Lions. The Huskers took the opener by a score of 8-2 and won game two 10-2 in five innings.

Nebraska (9-6) has won four straight games after taking the first three games in the series with Penn State (0-15). The Huskers scored 18 runs and produced 21 hits in the doubleheader, while limiting the Nittany Lions to four runs (two earned) on only four hits in the two games.

In the opener, Nebraska used a four-run third inning and three-run fourth to earn the 8-2 win. Senior Tristen Edwards, freshman Billie Andrews and senior Cam Ybarra – batting first, second and third in the Husker lineup – combined to go 8-for-10 with a double, a triple, two home runs, six runs scored and five RBIs. In the circle, junior Courtney Wallace allowed only three hits and two runs in a complete-game effort.

In game two, Nebraska scored eight times in the fourth inning to build a 10-0 lead. Senior Oliva Ferrell took a no-hitter into the fifth and final inning and quickly retired the first two batters before a walk, an error and an infield single spoiled not only the no-hit bid but also the shutout. Ferrell finished with a one-hitter and did not allow an earned run. Offensively, eight Huskers produced a hit, eight scored a run and six had at least one RBI in the win.

Wallace and Ferrell combined to limit Penn State to a 4-for-40 effort at the plate in the doubleheader. While the entire Nittany Lion lineup combined for four hits, Billie Andrews topped that effort herself by finishing 5-for-7 on the day with a triple, home run, four runs scored and four RBIs.

Nebraska and Penn State wrap up their four-game series at 11 a.m. on Sunday.