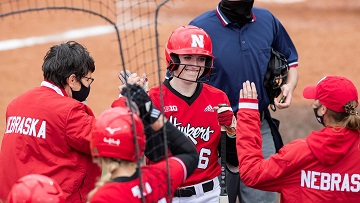 Grand slams were the story of Saturday’s softball doubleheader between Nebraska and Rutgers in Piscataway, N.J. In game one, a Husker grand slam capped a five-run first inning as Nebraska cruised to an 8-1 victory. But in game two, Rutgers broke a 5-5 tie with a grand slam of its own en route to a 10-6 win.

Nebraska (11-8) has won two of the first three games in the series and will go for its third consecutive Big Ten series win on Sunday.

In game one Saturday, Nebraska scored five runs just six batters into the game. Peyton Glatter’s first-inning grand slam gave the Huskers a 5-0 lead and Nebraska never looked back. NU added two insurance runs in the fourth and one more in the sixth in the 8-1 victory. Glatter finished with two hits and four RBIs to pace the Husker offense.

In game two, Rutgers (4-15) scored in five of its six innings at bat. The Scarlet Knights scored seven of their 10 runs with two outs, erasing a 1-0 deficit in the first inning and a 5-4 deficit in the fourth. The decisive moment came in the bottom of the fifth. The first two batters were quickly retired before a walk, a hit batter and an error extended the inning. Gabrielle Callaway then hit a grand slam to break a 5-5 tie and give Rutgers a 9-5 lead it would not relinquish.

Senior Cam Ybarra paced the Husker offense with a 4-for-4 performance in game two that included a double and three RBIs. Classmate Rylie Unzicker was 3-for-4 with a pair of runs scored, while senior Tristen Edwards kept her perfect weekend alive, as she homered, was hit by a pitch and was intentionally walked twice. Edwards has reached base safely in all 12 of her plate appearances against Rutgers this weekend.

Wallace (5-3) earned the win in game one with a complete-game five-hitter, allowing only one run. She then took the loss in relief in game two, although all four of the runs she allowed were unearned.

Nebraska and Rutgers wrap up their four-game series on Sunday with a single game at 10 a.m. (Central).