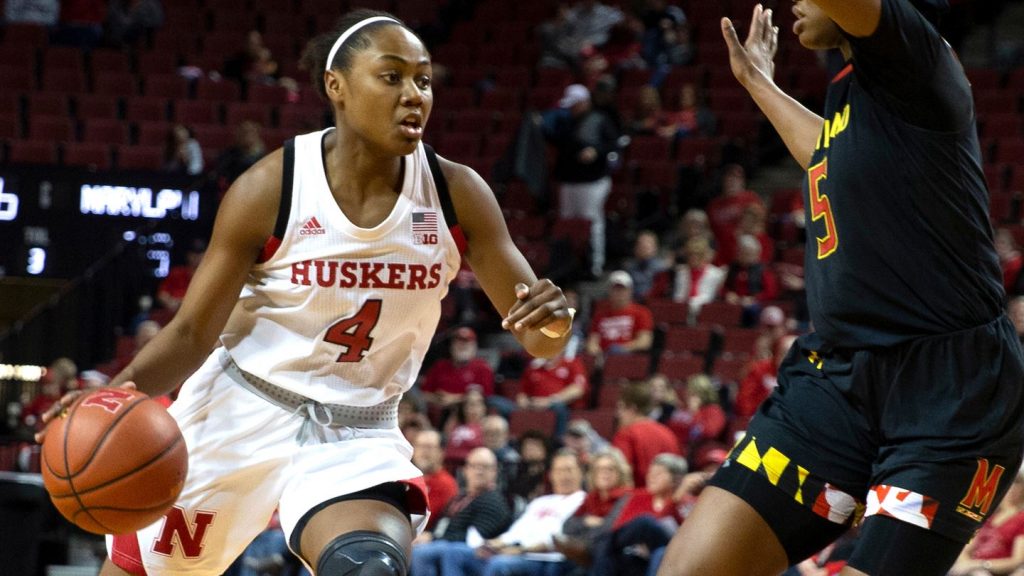 Collierville, Tenn. – Nebraska dominated at both ends of the court in the second half to fly past the UT Martin Skyhawks, 72-46, in the opening game of the Postseason WNIT Memphis Regional on Friday.

Isabelle Bourne and Ashley Scoggin led four Huskers in double figures with 13 points apiece, while freshman Whitney Brown buried four three-pointers in her first career start to add 12 points. Mi’Cole Cayton added a Nebraska career best with 10 points, as the Huskers pulled away early in the third quarter to improve to 13-12 on the season. Nebraska handed the Ohio Valley Conference regular-season champion Skyhawks just their sixth loss of the season, as they slipped to 20-6.

The Huskers trailed 24-23 late in the second quarter before Bella Cravens and Sam Haiby scored the final points of the half to send Nebraska to the locker room with a 27-24 edge. The Big Red extended the 4-0 run at the end of the first half to 17-0 by scoring the first 13 points of the third quarter.

Nebraska’s huge third-quarter spurt included three-pointers by Scoggin and Brown along with a traditional three-point play by Bourne. The sophomore from Canberra, Australia capped the run with two more free throws to put the Huskers up 40-24 with 6:13 left in the quarter.

Nebraska outscored UTM 23-10 in the period to take a 50-34 lead to the fourth. Then Brown and Scoggin took over on the offensive end. Brown, who made her first start in place of an injured Ruby Porter, buried three threes in the first four minutes of the fourth quarter. Scoggin added six points on a layup and a pair of jump shots as the two guards combined for all 15 points in a 15-4 Husker surge that pushed NU’s lead to 65-38 with 5:14 left.

Nebraska dominated the glass against UT Martin, 45-25, despite OVC Player-of-the-Year Chelsey Perry finishing with 20 points and 10 rebounds for the Skyhawks. Cravens led the Big Red on the boards with 14 rebounds in just over 21 minutes off the bench, while Bourne added eight boards. Freshman Annika Stewart contributed six points to go along with her eight points, while Brown added five rebounds from her guard spot.

Nebraska fell behind early, as Perry scored 10 quick points to build a 12-6 lead for the Skyhawks at the first media timeout in the game.

But NU rallied to cut the lead to 19-18 at the end of the first quarter despite early foul trouble for center Kate Cain, who finished the game with four points, four rebounds and two blocks. In a low-scoring second quarter, Scoggin scored the first points three minutes into the period to give Nebraska a 20-19 lead. Perry answered at the other end before Kendall Coley knocked down a three-pointer to give the Big Red a 23-21 edge.

Hayley Harrison answered with UT Martin’s only other field goal of the quarter with a three-pointer to give the Skyhawks a momentary 24-23 edge, before Cravens and Haiby scored back-to-back buckets for the Big Red to send the Huskers to the half with a 27-24 advantage.

Bourne led the Huskers with six points, six rebounds and two assists in the half, while Stewart added five points, four boards, an assist, a steal and a block. Cravens added three points and nine rebounds in 11 first-half minutes, as eight different Huskers found the scoring column in the half. Haiby scored her only two points of the game on her jumper late in the half. It was her only shot of the first half, while she missed her only attempt in the second half.

The Huskers advance to the WNIT Memphis Regional second round to take on Colorado at 5:00 on Saturday.