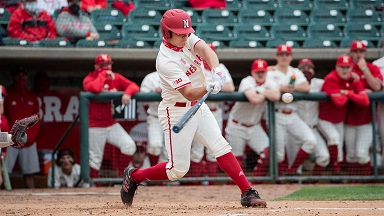 East Lansing, Mich. – The Nebraska baseball team jumped out to a 6-0 lead on Sunday at McLane Stadium but needed 12 innings to win its seventh conference series of the year with a 9-6 victory. Playing their first extra-inning game of the year, the Huskers scored three times in the top of the 12th and then Spencer Schwellenbach tossed his fourth scoreless inning of relief to earn his first win of the season. With the win the Huskers improved to 20-7 on the season, including a 14-6 record away from Lincoln.

Freshman Max Anderson entered Sunday 0-for-6 on the weekend and delivered three hits, including a triple, and four RBIs. Anderson’s fourth RBI of the game put the Huskers ahead for good, 7-6, on a single in the top of the 12th. Efry Cervantes also came up big with a two-out, two-RBI single in the 12th that gave the Huskers so insurance. The hit not only gave the Huskers some breathing room, but snapped an 0-for-29 slump for Cervantes.

Michigan State starter Wyatt Rush failed to make it out of the first inning, as he was tagged for three runs on one hit and three walks over 0.2 innings. MSU then got 1.1 innings of relief out of Jesse Heikkien before Sam Benschoter put on a masterful performance out of the pen. The senior allowed just five hits and struck out 17 Huskers over 9.1 inning. The 6-3 right hander took over in the top of the third and didn’t allow a hit until Griffin Everitt roped a one-out double in the eighth. Benschoter, who threw 127 pitches, finally hit a wall in the top of the 12th, when he allowed three runs.

The game started as an offensive shootout with the teams combining for 12 runs over the first three innings. Nebraska jumped out to a 6-0 lead after the top of the second before Michigan State answered with three runs each in the bottom of the second and third innings.

The pitching staffs then took over and the game stayed tied 6-6 over next eight innings. After the third inning neither team put two runners on base in an inning until the bottom of the 10th when Michigan State had runners on the corners following a two-out walk and a single.

The Huskers were in position to score in the ninth, 10th and 11th innings when they had their leadoff man on in each frame, including a triple from Anderson in the 10th, but were unable to score the go-ahead run.

Schwellenbach retired the Spartans in order in the ninth, stranded a pair of runners in the 10th and then got an assist from his defense in the bottom of the 11th. Adam Proctor worked a leadoff walk and pinch-runner Gabe Sotres moved into scoring position on a sacrifice bunt. Schwellenbach then got a fly out before Zaid Walker lined a two-out single to center field. Sotres tried to end the game by scoring from second, but Jaxon Hallmark made a perfect throw to Everitt, who slapped the tag on Sotres to send the game to the 12th.

For the fourth straight inning the Huskers got their leadoff man on, as Schwellenbach worked a walk. Cam Chick then struck out, but Schwellenbach stole second and a throwing error by Sotres allowed Schwellenbach to scoot to third, with one out. Anderson stepped in and drove the first pitch he saw through the left side for a RBI single. Anderson then stole second, Luke Roskam worked a walk, Everitt struck out and Brice Matthews walked to load the bases with two outs for Cervantes. The junior college transfer from Tucson, Ariz., drove a 2-2 offering through the left side to put the Huskers ahead 9-6.

After not going more than 2.0 inning in any of his first eight appearances of the year, Schwellenbach took the mound in the bottom of the 12th for his fourth inning of work. He started the frame with a strikeout before Bailey Peterson blasted a double to right-center field. Schwellenbach went right back to work with a line out and then got a diving catch from Mogo Hagge in left on a shallow pop fly to end the game.

After two straight series on the road the Huskers will be back at Hawks Field next weekend for three games against the Rutgers Scarlet Knights. The series opener is scheduled for Friday, April 30, at 6:30 PM.