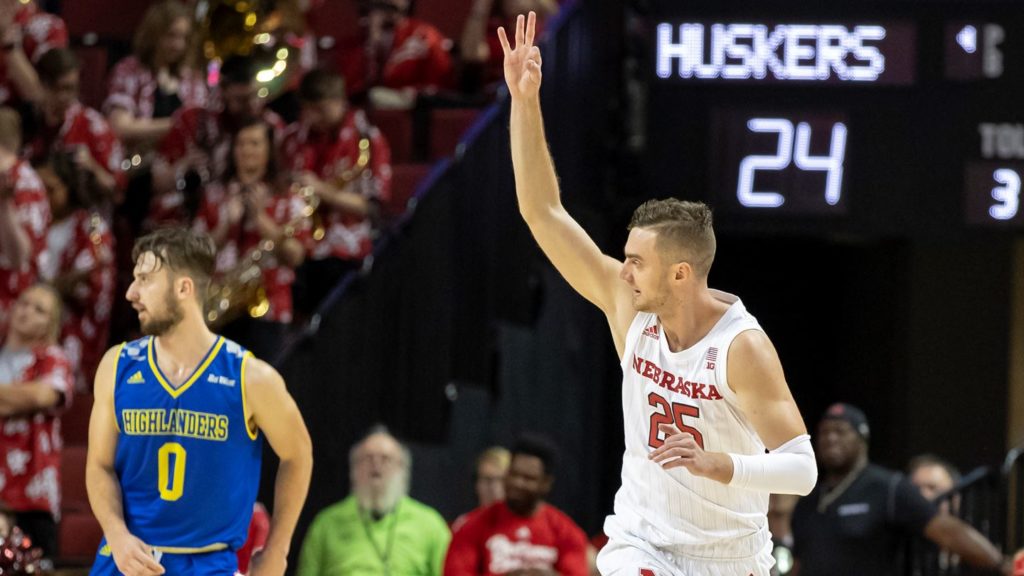 The Nebraska men’s basketball team opens Big Ten action on Friday night, as the Huskers travel to Assembly Hall for the matchup with Indiana.

Tipoff at Assembly Hall is set for 7 p.m., and the matchup between the Huskers and Hoosiers will be televised nationally on BTN with Kevin Kugler and Shon Morris on the call. The game will also be available on the Fox Sports app on tablets, computers and mobile devices

Fans can follow all of the action across the state of Nebraska on the Learfield-IMG Husker Sports Network with Kent Pavelka and Jake Muhleisen on the call. The game will also be available on Huskers.com, the Huskers app and TuneIn radio. The pregame show begins one hour prior to tipoff.

Nebraska (4-5) ran into a buzzsaw last Saturday, as the Huskers fell at Creighton, 95-76. The Bluejays shot 51 percent, including 8-of-16 from 3-point range, in the first half, while holding the Huskers to just 24 percent in the opening 20 minutes. NU played a much better second half, outscoring Creighton, 54-47, in the final 20 minutes.

Senior Haanif Cheatham led five Huskers in double figures with 14 points, the fifth consecutive game he has reached double figures. A 6-foot-5 guard, Cheatham paces the Huskers in both scoring (12.6 ppg) and rebounding (5.2 rpg) while ranking among the Big Ten leaders in field goal percentage (.573). He is one of four Huskers averaging double figures in a balanced attack, while four others average at least five points per game.

The Huskers wrap up their three-game road trip by taking on an Indiana team that is 9-1 on the season following a 57-54 win over UConn at the Jimmy V Classic in New York City Tuesday evening. In that game, Indiana didn’t put anyone in double figures, but had six players score at least six points, while limiting UConn to 36 percent shooting in the second half. The Hoosiers feature one of the Big Ten’s top freshmen in Trayce Jackson-Davis, who leads the Hoosiers in both scoring (14.1 ppg) and rebounding (8.5 rpg).

The Huskers will have a quick turnaround, as they return to action Sunday afternoon to take on a Purdue team which is 6-3 on the year and has been off since a 14-point win over Northwestern on Dec. 7.

PLAYER SPOTLIGHT
Matej Kavas tied a season high with three 3-pointers in the loss at Creighton on Saturday. He needs 14 3-pointers to reach 200 for his career. Kavas has given the Huskers a spark off the bench in his first year at NU, reaching double figures in four of his eight games off the bench.

NUMBERS TO KNOW
.526 – Thorir Thorbjarnarson is second in the Big Ten in 3-point percentage entering this week’s action. He is 10-of-19 from long range this season after going a combined 6-of-28 behind the 3-point stripe in his first two years.

4 – Double-digit scoring performances from Kevin Cross, which is the most by a Husker freshman since 2016-17 (5-Jeriah Horne and 4-Jordy Tshimanga).

5.7 – Assists per game for sophomore Cam Mack, which is on pace to be the highest average since Charles Richardson Jr. averaged 5.8 assists per game in 2006-07.

8 – Nebraska has had eight players score in double-figures during the first eight games of the season. Nebraska has four players averaging double figures.

50- Returning point total from last season, all by Thorir Thorbjarnarson. That is the lowest by any power conference team since the 2009-10 season.

SCOUTING INDIANA
Archie Miller is in his third season at Indiana after guiding the Dayton program for six years, leading the Flyers to four straight NCAA Tournament appearances. Miller’s first Indiana team went 16-15, and the Hoosiers improved to 19-16 and reached the NIT quarterfinals before falling to Wichita State.

The Hoosiers have been prolific offensively, ranking among the Big Ten leaders in scoring offense (80.3), field-goal percentage (.494) and 3-point percentage (.344) while getting to the foul line nearly 29 times per game. Indiana is also third in the Big Ten in rebounding margin, averaging 9.0 more caroms per game than its opponents.

The Hoosiers won their first eight games by double figures at Assembly Hall, highlighted by a 16-point win over Florida State in the Big Ten/ACC Challenge, before falling at Wisconsin 84-64 on Saturday. The Hoosiers responded with a 57-54 win over UConn in New York on Tuesday, winning despite shooting 37 percent from the field.

LAST SEASON’S MATCHUP
The Huskers started fast and finished strong, never trailing No. 25 Indiana in a 66-51 victory over the Hoosiers at Assembly Hall on Jan. 14, 2019. Nebraska scored the first nine points of the game and held Indiana without a basket over the final 5:38 en route to picking up their first road victory over a ranked opponent in more than two years.

Nebraska’s seniors shined in the win. Glynn Watson Jr. paced the Huskers with 15 points – including 12 points on 5-of-7 shooting in the second half – while Isaac Copeland Jr. chipped in 14 points and eight rebounds. James Palmer Jr. filled up the stat sheet with 11 points, a career-high-tying nine rebounds and a season-high seven assists. Tanner Borchardt was big off the bench, scoring seven points and grabbing five rebounds. Together, the four seniors combined for 47 points and 27 rebounds, while sophomore Thomas Allen added 10 points for the Big Red and junior Isaiah Roby had nine points and four rebounds. Romeo Langford led Indiana with a game-high 18 points, but he was just 5-of-14 from the field. Juwan Morgan added 17 points, but no other Hoosier had more than five points.

LAST TIME OUT
Haanif Cheatham had a team-high 14 points to lead five Huskers in double figures, but Nebraska’s start proved costly in a 95-76 loss at Creighton Saturday afternoon. Cheatham scored 12 of his 14 points in the second half as Nebraska shot 61 percent in the second half but was unable to overcome a blistering start by Creighton in the first 15 minutes.

Marcus Zegarowski led four Creighton players in double figures with 30 points, nine rebounds and six assists, as the Bluejays (7-2) shot 53 percent on the day, including 13 3-pointers. Ty-Shon Alexander added 22 points in the victory. Damien Jefferson, who entered the game 1-of-15 from 3-point range on the season, drained a pair of 3-pointers in a 18-2 Creighton spurt to open the game that set the tone.

DID YOU KNOW
• Friday’s matchup will mark the third time in nine seasons at Nebraska has opened Big Ten play against Indiana, as the Huskers hosted the Hoosiers in 2014-15 and traveled to Bloomington in 2016-17. It is also the first time since 2015-16 that the teams will meet twice during the regular season.

• Friday’s game at Indiana is the sixth consecutive game away from Lincoln for the Huskers and wraps up a three-game road trip. The six straight games away from home is NU’s longest stretch since the 1997-98 season. NU has a quick turnaround and hosts Purdue on Sunday afternoon at Pinnacle Bank Arena for its first home game since Nov. 22.

• No current Husker player nor Fred Hoiberg has faced Indiana. NU assistant Doc Sadler is 1-0 against the Hoosiers as a head coach, posting a 70-69 win over the No. 11 ranked Hoosiers during the 2011-12 season. In that game, the Huskers rallied from a 11-point deficit in the final 6:38 against a Hoosier team that featured eventual lottery picks Victor Oladipo and Cody Zeller.

• Nebraska’s 54-point second half at Creighton was the Huskers’ highest scoring half since scoring 55 in the first half against Mississippi Valley State in the 2018-19 opener.

• Through the first nine games, 75.9 percent of the Huskers’ offense has come from players who were added in the offseason, including five of Nebraska’s top six scorers.

• One of the biggest points of emphasis for Hoiberg and his staff has been to shoot better from 3-point range, and that work has paid off over the past three weeks. Over the last six games dating back to Nov. 22, NU is shooting 38 percent from 3-point
range and averaging 8.7 3-pointers per game after shooting just 23 percent in the first three games of the season.

• It is not surprising that Nebraska has relied on its 3-point shooting early on, as Hoiberg’s Iowa State teams led the Big 12 in 3-pointers in four of his five seasons at the school. The Huskers are on pace to average 7.8 3-pointers per game, a total which would rank third in school history and be the most since the 2006-07 campaign.

• Friday’s game features two of the Big Ten’s top teams in getting to the foul line. Indiana leads the Big Ten, averaging 28.5 attempts per game, while Nebraska is fourth at 23.0 free throws per contest.

• Nebraska has put at least four players in double figures in eight of the last nine games. The only time it didn’t occur was against South Florida on Nov. 27, when the Huskers had a pair of 20-point scorers in Haanif Cheatham (26) and Dachon Burke Jr. (21). The Huskers put five players in double figures against Washington State on Nov. 25 and last Saturday against Creighton. The Huskers nearly had six double figure scorers in the loss to the Bluejays, as Dachon Burke finished with nine points.

• After shooting 34 percent in their first two losses, the Huskers have shot much better as a team. Over the last seven games, the Huskers are shooting 46 percent from the floor, including three performances of 52 percent or better in that stretch.

• Nebraska’s 14 first-year players on the roster matches TCU for the most in the nation in research done by the Utah SID John Vu. Only four teams (TCU-14, Nebraska-14, East Carolina-13 and Utah-12) have at least 12 newcomers on their 2019-20 rosters. Nebraska returns a national-low 1.9 percent of its scoring from last season and the 50 returning points is the lowest by any power conference team since 2009 according to noted statistician Ken Pomeroy.

• The Big Ten won both of its challenges for the first time, going 5-3 against the Big East in the Gavitt Tipoff games and posting an 8-6 mark to win the Big Ten/ACC Challenge. The Big Ten has won the last two Gavitt Tipoff Games, while the Big Ten’s win over the ACC was the first by the conference since 2015.

THE CHASE FOR 1,000
Despite having only 50 points returning from last season, a pair of Huskers are quickly closing in on 1,000 career points at the collegiate level.

Senior Haanif Cheatham enters the Indiana contest with 955 points during his career and is 45 away from the 1,000-point mark. Cheatham, who previously played at Marquette and Florida Gulf Coast, is averaging 12.6 points per game and is setting career bests in field goal percentage (.572) and rebounding (5.2 per game). Dachon Burke comes into Big Ten play eith 921 career points, counting his two seasons at Robert Morris, and needs 79 points to reach that plateau. Burke, who played two
seasons at Robert Morris, is averaging 12.0 points per game for the Huskers in his first season of action at NU.

They will join Matej Kavas, who went over 1,000 career points on Nov. 22. Kavas now has 1,033 career points between his time at Seattle and Nebraska.

SETTING A FAST PACE
Not only are the Huskers adjusting to a whole new roster, but playing at a significantly faster pace than in previous years. The Huskers are 16th nationally in offensive tempo, as their average possession is 15.1 seconds.

• In his five seasons as a college coach, Hoiberg’s teams have ranked in the top 20 in offensive tempo four times, including top-10 rankings in both 2014 and 2015.

• Hoiberg’s first Iowa State team in 2010-11 jumped from 67th to 20th nationally in offensive pace and ranked in the top 40 nationally in adjusted tempo in four of his five seasons in Ames, including top-15 nationally in his last two campaigns.

• In the KenPom era (1997-present), only one Husker team has ranked among the top 100 nationally in adjusted tempo – the 1999-2000 Huskers under Danny Nee. The Huskers’ quickest offensive tempo in the last decade was in 2017-18 when the Huskers were 140th in offensive tempo.