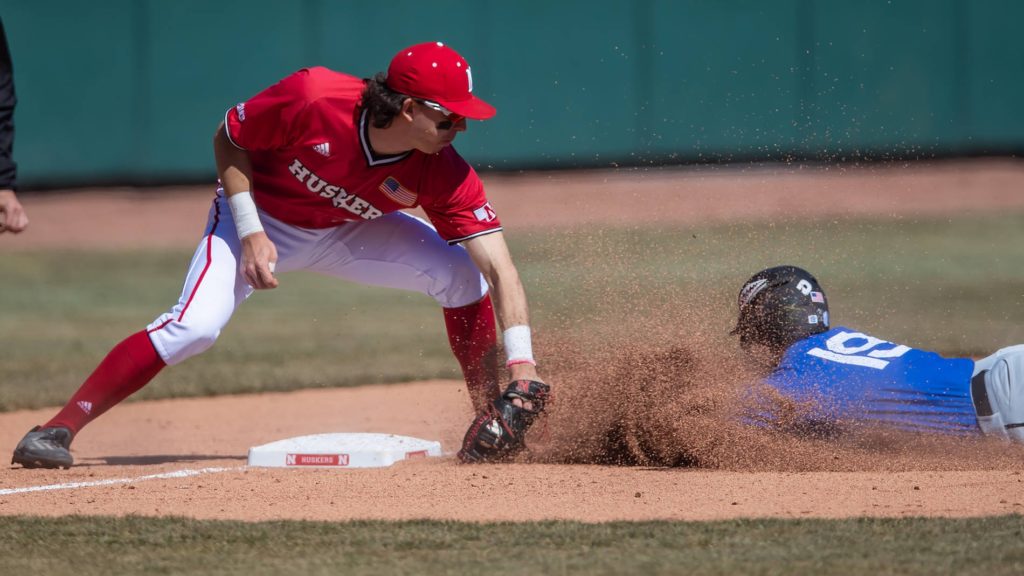 The Nebraska baseball team (8-7) begins conference play this weekend when the Huskers host Michigan State (3-15) for a three-game series at Hawks Field.

The Huskers and Spartans open their series with a doubleheader on Friday, starting at 3:05 p.m. (CT). The second game will begin approximately 45 minutes after the conclusion of the first game. The doubleheader is an adjustment from the original schedule due to forecasted weather in Lincoln this weekend. The third game of the series is currently scheduled for Saturday at 2:05 p.m.

Single-game tickets are now available at Huskers.com/tickets or by calling 1-800-8-BIGRED. In addition, fans can still purchase a Diamond Deal package, which allows the ticket holder to build their own nine-game package for $90.

Nebraska enters the weekend ranked 22nd in the RPI, and has the No. 9 strength of schedule in the nation, according to WarrenNolan.com.

Last Time Out
The Huskers swept their two-game midweek series against Air Force at Hawks Field, winning 7-6 on Tuesday before a 12-3 triumph on Wednesday.

Next Up
The Huskers visit intrastate rival Creighton on Tuesday at TD Ameritrade Park in Omaha, Neb. First pitch is set for 6:35 p.m. (CT).

How to Listen/Watch the Huskers

• Fans can listen to Greg Sharpe and Ben McLaughlin call the action this weekend on the Learfield/IMG Husker Sports Network.

• Every game this season can be heard on Huskers.com and the Official Nebraska Huskers App for both iOS and android devices.

• All three games will be carried on TuneIn.com and the TuneIn App on the Husker Sports Network channel.

• All three games will be streamed live on BTN Plus, with a paid subscription required to watch.

• Nebraska leads the all-time series against Michigan State, 10-8, dating back to the first meeting in 1937. The two teams met last season, with the Spartans taking both games.

• Nebraska is 2-1 when facing the Spartans at home, with all three games taking place in 2017.

• This season, Michigan State is 3-15 overall and enters the weekend on a five-game losing streak. The Spartans’ midweek game against Central Michigan was postponed after MSU dropped all four games against Connecticut last weekend.

• Nebraska played its long-awaited home opener on Tuesday, March 19 after each of the first eight scheduled home games had either been canceled, postponed or moved to a new location due to weather and/or field conditions.

• It marked Nebraska’s latest home opener since 1978 when the Huskers first played a home game that season on March 28. The 1978 squad played 17 games away from Lincoln before its home opener. This season, the first 13 games were played away from home.

• The Omaha game, originally scheduled as the home opener for March 5, was postponed. The North Dakota State game, scheduled for March 13, was also postponed. The teams are looking for a date later in the season to make up those games.

• The Baylor series, March 8-10, was moved from Lincoln to Waco, Texas due to cold weather and snowy conditions.

• The New Mexico State series, originally slated for March 15-17, was canceled due to field conditions.

• Senior right-hander Matt Waldron, who has made two starts and four appearances overall, leads the team with 26 strikeouts this season.

• Waldron has allowed only two walks, and his 13.00 strikeout-to-walk ratio ranks first in the Big Ten and ninth in the nation.

Offense Among the Best in the Big Ten

• As a team, Nebraska ranks third in the Big Ten in batting average (.278) this season.

• Individually, Mojo Hagge and Aaron Palensky rank among the top 10 in batting average in the conference. Hagge’s .340 clip is fifth-best in the Big Ten, while Palensky’s .339 average is tied for sixth.

• Palensky has two triples this season, which is tied for first in the Big Ten with three other players.

• After a rare weekend off, Nebraska showed little signs of rust by sweeping Air Force during its two-game midweek series at Hawks Field. Nebraska defeated the Falcons 7-6 on Tuesday and 12-3 on Wednesday.

• Keegan Watson homered in both games. For his career, Watson has three hits and they are all home runs.

• On Tuesday, newcomers Spencer Schwellenbach and Aaron Palensky each recorded three-hit performances to lead Nebraska’s offense. Palensky was a home run shy of hitting for the cycle. Freshman Colby Gomes earned his team-high third save of the season on the mound after going 2-for-4 at the plate.

• Nebraska’s nationally ranked recruiting class has played a key role for the Huskers so far this season. One-third of the Huskers to register at-bats this season are newcomers (6-of-18). In addition, four newcomers have made pitching appearances, including Tyler Martin, who made his debut on Wednesday.

• Baseball America tabbed the group among its top-35 recruiting classes. After announcing its top 25, Baseball America released its “Next 10” in alphabetical order. Nebraska was one of two Big Ten teams on the list, along with No. 24 Illinois.

• Rawlings/Perfect Game ranked Nebraska’s recruiting class 37th nationally and third in the Big Ten, behind No. 32 Purdue and No. 36 Indiana.

• The Huskers welcome 15 newcomers to the roster this season, including 11 freshmen, as the entire recruiting class made it to campus.

• Nebraska has had a pitcher earn 10 or more saves in each of the last five seasons after no Husker pitcher reached the 10-save milestone during the previous seven seasons (2007-13).

Nebraska’s Record with the Lead Since 2012

• Nebraska has the No. 9 strength of schedule in the nation, according to WarrenNolan.com.

• Nebraska played eight of its first 13 games against top-25 opponents before the Air Force series. Five of those games were against 2018 College World Series teams (Oregon State and Texas Tech).

• Before cancellations, Nebraska was scheduled to play 2018 CWS qualifier Mississippi State (March 3) and 2018 NCAA Tournament team New Mexico State (March 15-17), which would’ve given NU a schedule with seven NCAA teams, three of which made the CWS last season.

• The Huskers also face each of the top four teams from last year’s Big Ten standings.

• The other 2018 NCAA Tournament qualifiers on Nebraska’s schedule are Baylor and Purdue. NU won 2-of-3 against Baylor, March 8-10, in Waco, Texas. The Boilermakers finished second in the Big Ten regular-season standings and took runner-up honors at the conference tournament.

• Michigan and Illinois, who finished third and fourth, respectively, in the Big Ten last season each visit Hawks Field this season.

• Nebraska’s penultimate regular-season series is against Arizona State (May 10-12) at Hawks Field. The series history between the Huskers and Sun Devils includes NU’s first win in a College World Series game in 2005.

Huskers Eye Bounce Back Season in 2019

• Nebraska has qualified for three of the last five NCAA Tournaments (2014, 2016, 2017) and looks to get back to the postseason in 2019 after missing the national and conference tournaments in 2018.

• Nebraska, who enters its eighth season as a member of the Big Ten, finished in the top two of the regular-season standings in four of its first six seasons in the conference before finishing 10th in 2018. NU won the regular-season crown in 2017 after finishing second in 2013, 2014 and 2016.

• The 2018 season was the first time NU missed the eight-team conference tournament since joining the Big Ten before the 2012 campaign. Nebraska took runner-up honors at the Big Ten Tournament in 2013 and 2014.

• Head Coach Darin Erstad (243-176-1) became the fourth-winningest head coach in program history last season after reaching the 200-win milestone in 2017. He is seven wins away from the 250th win of his career.

Most Wins by a Head Coach in Nebraska Baseball History

• Erstad, the 2017 Big Ten Coach of the Year, holds a conference record of 96-68-1 as the head coach at Nebraska. He is four Big Ten wins away from his 100th career conference win.

• The Huskers took advantage of the new rule which allows NCAA Division I teams to play two fall exhibitions that don’t count against the 56-game spring schedule.

• Nebraska hosted Wichita State on Sept. 22 and Kansas on Oct. 6 with both games played at Hawks Field. The scrimmages were open to the public and free to attend. Score wasn’t kept for either contest.

• Head Coach Darin Erstad announced on Aug. 22 that Curtis Ledbetter will serve as the Nebraska’s volunteer assistant coach in 2019 after spending 10 years as the team’s director of operations.

• Ledbetter, a former all-conference performer at Nebraska, joined the Husker staff in May of 2008 after a stint in professional baseball. He was a member of NU’s 2005 College World Series team, which holds the school record for single-season wins (57).

• The 2019 campaign marks Nebraska’s 18th year playing home games at Hawks Field at Haymarket Park. The Huskers moved to Hawks Field in 2002 after playing at Buck Beltzer Stadium for 23 years from 1979 to 2001.

• Nebraska holds a 354-133-1 record at Hawks Field, which includes a 2-0 mark this season. NU has posted a winning record at home in each of the last 17 seasons.

• Nebraska has won 60 percent or more of its home games 14 times over the last 17 seasons.

• Nebraska has ranked in the top 30 nationally in average attendance in each of the past 17 years. Last season, the Huskers ranked 12th in the nation with an average of 4,203 fans per home game (over a span of 25 games).