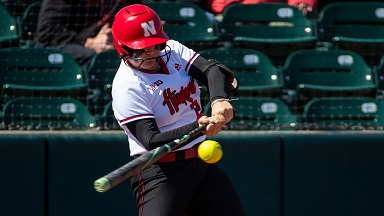 Lincoln – Behind timely hitting and an outstanding pitching performance from ace Sydney Sickels, Illinois took the series opener from the Nebraska softball team Friday night by a score of 4-0.

Sickels (9-2), the reigning Big Ten Pitcher of the Week, tossed her fifth shutout of the season. She struck out seven and the four hits Nebraska managed were more than Sickels allows in an average game.

Junior right-hander Courtney Wallace (5-4) pitched well in a losing effort for Nebraska (11-10). In 6.0 innings, Wallace allowed four runs on six hits in a performance that was better than her line indicated. Freshman Kaylin Kinney pitched a perfect seventh inning for the Huskers.

Offensively, senior Tristen Edwards, juniors Peyton Glatter and Courtney Wallace and freshman Billie Andrews each produced a hit for Nebraska. Edwards singled in her first at bat and was hit by a pitch in both of her next two trips to the plate to stretch her streak to 18 consecutive plate appearances reaching base safely. It was the fourth consecutive game Edwards has reached base safely in every plate appearance. Andrews’ single extended her hitting streak to 10 games, while Glatter saw her hitting streak reach eight games.

Illinois jumped out to a 1-0 lead in the top of the first inning. A one-out walk, a sacrifice bunt and an RBI double down the right field line plated the game’s first run.

Another RBI double made it 2-0 after two innings.

In the bottom of the third, Billie Andrews singled with two outs and stole second before Edwards was hit by a pitch. With the tying runs on base, Ybarra grounded a hard ball down the first base line where Kailee Powell dove and was able to knock down the hard grounder, find the ball and recover in time to get Ybarra to the bag and end the inning.

Illinois tacked on two insurance runs in the top of the sixth on back-to-back two-out RBI hits.

Nebraska and Illinois continue their four-game series on Saturday with a doubleheader at Noon.