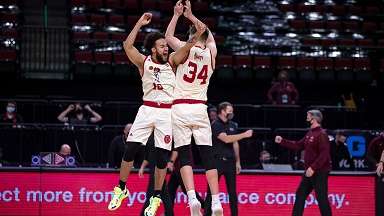 Nebraska’s veterans made the plays down the stretch, as Nebraska snapped a five-game losing streak with an 78-74 victory over Minnesota Saturday night.

Kobe Webster, Thorir Thorbjarnarson and Derrick Walker combined for the Huskers final nine points after Minnesota whittled a 13-point deficit to 69-66 with 2:39 left.

Thorbjarnarson found Walker for a pair of baskets, the second made it a 73-68 lead with 1:38 left. Walker finished with career highs with 12 points and nine rebounds in 31 minutes.

Minnesota, behind a 41-point effort from Marcus Carr, pulled to with 74-73 with 13.6 seconds left, but Webster sank a pair of free throws to push the lead to four with 8.5 seconds. After Minnesota was within 76-74, Thorbjarnarson iced the game by going 2-of-2 from the line with 4.0 seconds remaining.

Thorbjarnarson and Webster finished with 10 points apiece, as five Huskers (6-17, 2-14) finished in double figures in the win. Dalano Banton paced the Huskers with 14 points and seven rebounds, as he had seven points in an 11-2 Husker run that turned a 53-49 lead into a 13-point cushion with 8:17 remaining.

Trey McGowens had 11 points and five of the Huskers’ 19 assists, as Nebraska shot 55 percent, including 9-of-17 from 3-point range.

The Huskers play their final home game of the season Monday, March 1, as they host Rutgers at Pinnacle Bank Arena. Tipoff is set for 6 p.m.