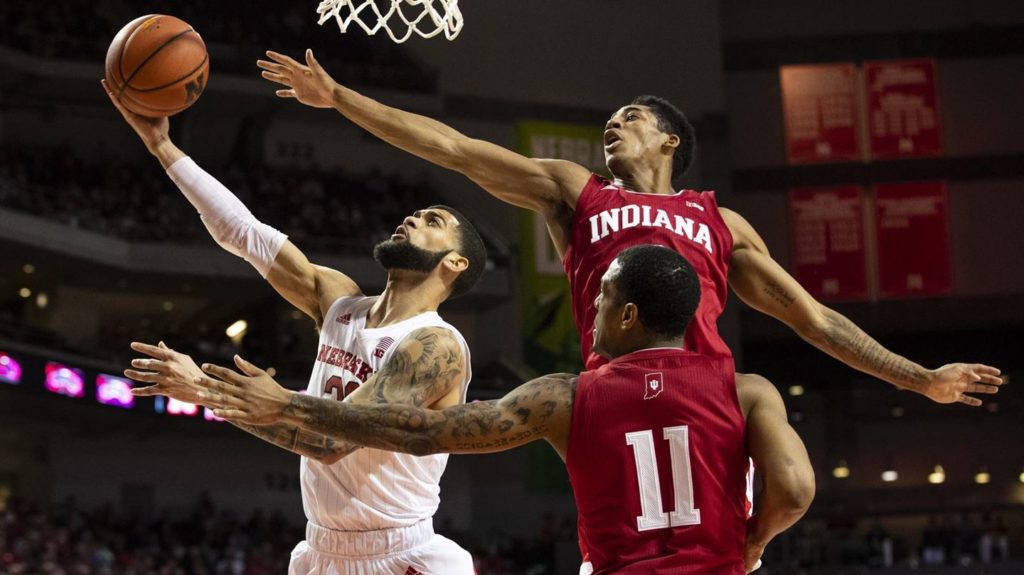 The Nebraska men’s basketball team hits the road to begin a two-game road trip on Tuesday evening, as the Huskers travel to Madison, Wis., for a matchup with the Wisconsin Badgers.
Tipoff at the Kohl Center is slated for shortly after 8 p.m. and the matchup will be carried nationally on BTN with Dave Revsine and Robbie Hummel on the call. The game can also be streamed via the web, smartphones, tablets and connected devices through the Fox Sports app.

Fans can follow all of the action across the state of Nebraska on the Learfield IMG College Husker Sports Network with Kent Pavelka and Jake Muhleisen on the call. The game will also be available on Huskers.com, the Huskers app and TuneIn radio. The pregame show begins one hour prior to tipoff.

Nebraska (7-11, 2-5 Big Ten) looks to snap a three-game losing streak after an 82-74 loss to Indiana on Saturday night. The Hoosiers used a 16-2 spurt to open the second half to build a 19-point cushion. Nebraska battled back and got to within six points and had a couple of opportunities to make it a one-possession game, but could not complete the rally. Indiana hit 51 percent from the field and hit eight 3-pointers, after entering the game shooting 25 percent from 3-point range in Big Ten play.

For Nebraska, sophomore Cam Mack led NU with 20 points and nine assists to pace four Huskers in double figures. It was Mack’s second 20-point game of the year and the sixth time he has dished out at least eight assists in a game. Thorir Thorbjarnarson added 13 points and nine boards, while Dachon Burke Jr. (12) and Haanif Cheatham (10) also finished in double figures.

On the year, Mack is third in the Big Ten in assists (6.8 apg) as he guides an attack that has six players averaging at least 7.0 points per game. With 123 assists, Mack needs just 13 assists to crack NU’s single-season top-10 list and is one assist away from matching NU’s highest assist total since joining the Big Ten  (Tai Webster, 124, 2016-17).

Wisconsin (11-7, 4-3) looks to bounce back following a 67-55 loss at No. 15 Michigan State on Friday evening. Nate Ruevers had 19 points and seven rebounds, while Kobe King added 10 points against MSU. Wisconsin shot just 35 percent, while Michigan State shot 47 percent and out-rebounded the Badgers 41-32. Ruevers leads a balanced Wisconsin attack with 14.2 points per game.

NUMBERS TO KNOW
.459- Thorir Thorbjarnarson is third in the Big Ten in 3-point percentage entering Tuesday’s game with Wisconsin. He has 28 3-pointers in 2019-20 after going a combined 6-of-28 behind the 3-point stripe in his first two years.

3.1 – Nebraska enters the week leading the Big Ten in turnover margin at +3.1 per game. NU has committed 12 or fewer turnovers in each of the last 10 contests. NU is third in the Big Ten by committing 11.1 turnovers per game.

4 – Double-figure assist games for Cam Mack, which is the most by a Husker since Brian Carr had five in the 1985-86 season.

13 – Double figure scoring runs that Nebraska has had in 2019-20 following an 11-0 first-half run against Indiana.

SCOUTING WISCONSIN
Under fifth-year coach Greg Gard, the Badgers are 11-7 overall and 4-3 in Big Ten play and is tied for fourth in the Big Ten entering this week’s action. The Badgers returned three starters from a team that won 23 games and reached the NCAA Tournament in 2019. UW got off to a slow start and was 3-4 following a loss to NC State, but has posted a 7-3 mark in its last 10 games, including road wins at Ohio State and Penn State. The Badgers have three wins over ranked teams on the season and also have a 20-point non-conference win at Tennessee.

Wisconsin’s stretch is its ability to control the pace, as the Badger are 14th in scoring offense, but are third in scoring defense and lead the conference by committing just 10.6 turnovers per game. UW also leads the Big Ten, hitting 77.2 percent from the line.  The Badgers rely on a nine-player rotation with seven player averaging over 7.0 points per game. Junior Nate Reuvers leads UW in scoring at 14.2 ppg, while Kobe King averaged 10.6 ppg. Ohio State transfer Micah Potter has been a boost, averaging 9.4 ppg and 5.8 rpg in eight games since becoming eligible. UW also has five players who average at least one 3-pointer per game.

Series History: Tuesday’s matchup is the 31st meeting between the two programs, as Wisconsin has a 16-14 advantage. The series dates back to the 1903-04 season, as Nebraska won the first meeting, 25-22 over the Badgers in Lincoln before Wisconsin took five of the next six meetings from 1907 to 1955.  Nebraska then won eight straight games before the Badgers won the next five meetings, including the first four in Big Ten play, before the Huskers topped the No. 9 Badgers in the final regular-season game in 2013-14. The Badgers won both meetings in 2018-19, including a 66-62 in the Big Ten Tournament quaterfinals. The Huskers are 4-10 against Wisconsin since joining the Big Ten (3-9 in regular season; 1-1 in Big Ten Tournament).

Indiana used a fast start to the second half, as a 16-2 Hoosier run turned a 46-41 halftime lead into a 19-point bulge only to see Nebraska rally in the final 15 minutes. The Huskers slowed the Hoosiers on the defensive end and got to within six and had several chances to pull closer, but Indiana held on for a crucial road win.

Cam Mack scored a game-high 20 points and dished out nine assists to lead the Husker offense against the Hoosiers. Mack was one of four Huskers in double digits, along with Thorir Thorbjarnarson (13 points), Dachon Burke Jr. (12) and Haanif Cheatham (10). Thorbjarnarson also added a season-high nine rebounds and three steals.

Indiana’s Trayce Jackson-Davis led the Hoosier offense with 18 points on 6-of-7 shooting from the field and 13 boards. IU also got double-digit efforts from Joey Brunk (16 points) and Justin Smith (15).

STORYLINES
• ESPN’s BPI has Nebraska with the second-hardest strength of schedule remaining as of Jan. 19. In fact, the top seven and 10 of the top 12 are from the Big Ten. All 14 conference teams are in the top 25.

• Nebraska enters the Wisconsin game averaging 72.6 points per game, which is on pace to be Nebraska’s highest scoring average since the 1996-97 squad averaged 72.9 points per game.

• Despite being undersized and having just one player who had played in a Big Ten game entering the season, Nebraska’s play in Big Ten action is starting to resemble the team’s that Coach Hoiberg had at Iowa State, especially with ball movement and limiting turnovers. NU is in the top four in six offensive categories entering the week, including assist-to-turnover ratio and 3-point shooting.

• Cam Mack is the only Husker in the last 30 years to have multiple points-assists double-doubles in the same season as he has four this season, including three in Big Ten play. From 1989-90 to the end of the 2018-19 season, it had happened just five times. Mack’s consecutive points-assists double-doubles against Indiana and Purdue were the first since Brian Carr in December of 1985 (vs. UC-Irvine and Creighton).

Not only are the Huskers adjusting to a whole new roster, but playing at a significantly faster pace than in previous years. The Huskers are 13th nationally in offensive tempo, as their average possession is 15.3 seconds per possession as of Jan. 19.

• The only power conference schools that plays at a faster pace are St. John’s (10th) and Alabama (11th).

• In his five full seasons as a college coach, Hoiberg’s teams have ranked in the top 20 in offensive tempo four times, including top-10 rankings in both 2014 and 2015.

• Hoiberg’s first Iowa State team in 2010-11 jumped from 67th to 20th nationally in offensive pace and ranked in the top 40 nationally in adjusted tempo in four of his five seasons in Ames, including top-15 nationally in his last two campaigns.

• In the KenPom era (1997-present), only one Husker team has ranked among the top 100 nationally in adjusted tempo – the 1999-2000 Huskers under Danny Nee. The Huskers’ quickest offensive tempo in the last decade was in 2017-18 when the Huskers were 140th in offensive tempo.

MACK DELIVERS AS HUSKERS’ LEAD GUARD
Junior college transfer Cam Mack was the cornerstone of the Huskers’ recruiting class, and has lived up to the billing during the first half of the year. Mack was the No. 3 JUCO recruit in the country last year at Salt Lake CC and has made an impact in his first season at Nebraska.

Mack, who was listed as the top JC point guard recruit in the country, enters the Wisconsin contest averaging 12.9 points per game while leading the Huskers in assists (6.8) and assist-to-turnover ratio (2.6-to-1).

• He is third in the Big Ten in assists per game, while also 10th in the Big Ten steals per game (1.3). Mack, who is 11th nationally in assists, is one of four Big Ten players – joining Cassius Winston (Michigan State), CJ Walker (Ohio State) and Geo Baker (Rutgers) – to rank in the top 10 of the Big Ten in both assists and steals as of Jan. 19.