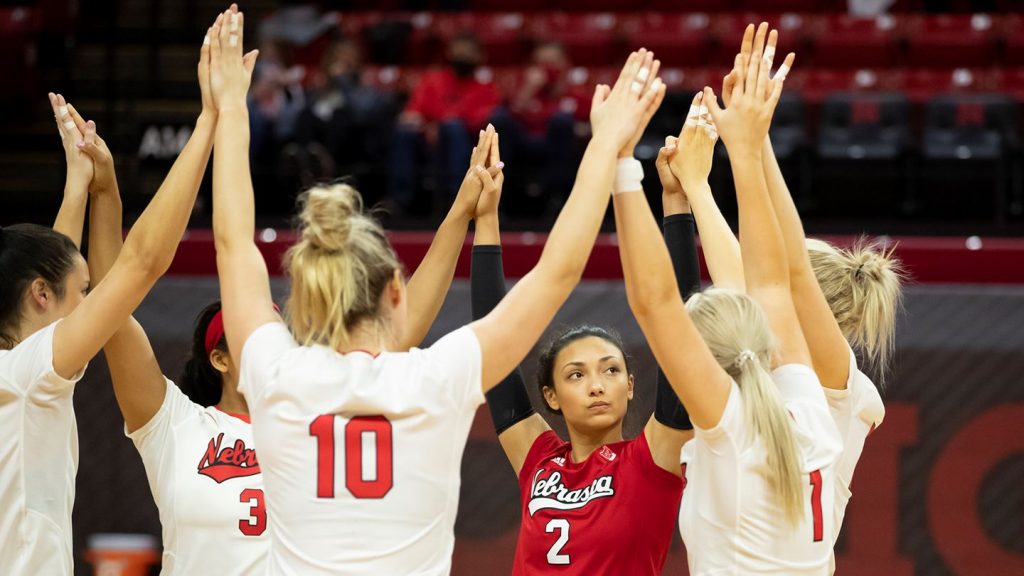 • The No. 5 Nebraska volleyball team will play its only home-and-home series of the season against the Iowa Hawkeyes this week. NU and Iowa will face off at Carver-Hawkeye Arena in Iowa City on Wednesday at 7 p.m. on BTN (FoxSports stream). The teams will make the return trip to Lincoln to play at 6 p.m. at the Bob Devaney Sports Center on Saturday on NET (BTN+ stream).
• Husker Sports Network will broadcast all the Husker action this week on HSN radio affiliates, including 107.3 FM in Lincoln and AM 590 in Omaha. A live audio stream will be provided at Huskers.com and the Huskers app. John Baylor is in his 27th season doing play-by-play for the Husker volleyball program. Lauren (Cook) West, a former All-America setter for the Huskers, will provide color commentary.

About the Huskers
• The Huskers led the Big Ten in defense last season and so far this season have picked up where they left off, holding opponents to .173 hitting to rank second in the conference behind only Wisconsin (.122).
• Nebraska’s .258 season hitting percentage ranks third in the Big Ten behind Wisconsin (.351) and Ohio State (.264).
• Nebraska ranks second in the conference in kills (14.09 per set), assists (12.77 per set) and third in digs (14.77 per set).
• Senior outside hitter Lexi Sun leads the Huskers with 3.93 kills per set with a team-high 14 service aces as well as 2.07 digs per set. She ranks fifth in the Big Ten in kills per set. Sun was named the Big Ten Player of the Week one week ago after averaging 5.17 kills per set on .315 hitting in the two wins at Illinois.
• Senior middle blocker Lauren Stivrins is putting up 3.42 kills per set on a team-high .471 hitting percentage, which ranks first in the Big Ten Conference.
• Sophomore outside hitter Madi Kubik adds 2.81 kills per set and 2.53 digs per set.
• Junior setter Nicklin Hames paces the Husker attack with 11.12 assists per set – most in the Big Ten – and she chips in 3.00 digs per set with nine service aces.
• Junior middle blocker Kayla Caffey has stepped in for the Huskers and contributed 1.83 kills per set on .336 hitting with 1.00 blocks per set.

Series History
• Nebraska leads the all-time series with Iowa, 31-0. Iowa did hold a 2-1 lead when the teams last played in Lincoln on Nov. 16, 2019, before the Huskers rallied to remain unbeaten against the Hawkeyes. It was the first-ever five-set match between the teams.

2020-21 Huskers at a Glance
• The Huskers return every starter from last year’s 28-5 squad that reached the NCAA Regional Final against eventual national runner-up Wisconsin.
• Senior middle blocker Lauren Stivrins and senior outside hitter Lexi Sun were AVCA All-Americans and All-Big Ten First-Team selections in 2019. Junior setter Nicklin Hames was also an All-Big Ten First-Team choice in 2019. Stivrins and Hames return to captain the Huskers for a second straight season.
• Sophomore outside hitter Madi Kubik was the Big Ten Freshman of the Year in 2019 and, along with sophomore libero Kenzie Knuckles, was a member of the All-Big Ten Freshman Team.
• The Huskers added four newcomers during the offseason, including junior Missouri transfer Kayla Caffey. The middle blocker ranked ninth nationally with a .408 hitting percentage during the 2019 season. She joins three freshmen who are new to the program: middle blocker Kalynn Meyer, setter Anni Evans and defensive specialist Kaylei Akana.

Two Huskers Named to Preseason All-Big Ten Team
• Nebraska volleyball seniors Lauren Stivrins and Lexi Sun were voted to the Preseason All-Big Ten Team by the league’s 14 head coaches. The coaches also tabbed the Huskers as the No. 3 team in the Big Ten Preseason Poll behind Wisconsin and Minnesota.
• Stivrins is a two-time AVCA All-American and two-time All-Big Ten First-Team selection. She posted 2.55 kills per set, 1.07 blocks per set and a team-best .374 hitting percentage in 2019. The senior middle blocker led the Huskers to a .152 opponent hitting percentage as a junior, which ranked eighth in the nation. The Scottsdale, Arizona native also served nine aces and was a unanimous first-team All-Big Ten selection a year ago. She led the Huskers to an eighth straight NCAA Regional Final appearance and became the 32nd Husker all-time to earn multiple AVCA All-America honors in a career.
• Sun earned her first ever All-America accolade in 2019 after leading the Huskers with 3.57 kills per set with 2.45 digs per set and 25 service aces. The native of Encinitas, California posted double-digit kills in 18 of 20 Big Ten matches and was a first-team All-Big Ten selection for the first time. She had 10 double-doubles as a junior, second-most on the team. Sun, a senior outside hitter, received AVCA All-America honorable mention as a freshman at Texas in 2017 before transferring to Nebraska.
• Defending Big Ten champion and NCAA runner-up Wisconsin was the unanimous choice by the coaches as the top team in the Big Ten Preseason Poll. Minnesota, Nebraska, Penn State and Purdue rounded out the top five teams.

Kubik and Knuckles Set to Build on Strong Freshman Campaigns
• Sophomore outside hitter Madi Kubik earned Nebraska’s first Big Ten Freshman of the Year honor and first conference freshman of the year in 2019 since Hannah Werth won the award in 2009 in the Big 12. Kubik averaged 2.73 kills and 2.52 digs per set in her first year as a Husker. She ranked fourth among Big Ten freshmen in kills (2.96 per set) and digs (2.51 per set) in conference play. The outside hitter was also named to the All-Big Ten Second Team and the All-Freshman Team. Kubik was the first Husker freshman to be named to an All-Big Ten team since Kadie Rolfzen in 2013.
• Sophomore libero Kenzie Knuckles also earned All-Freshman Team accolades after leading the Huskers with 3.71 digs per set in her first year as the Huskers’ libero. Knuckles served 20 aces and was a Big Ten Freshman of the Week and Big Ten Co-Defensive Player of the Week during the season, helping the Huskers lead all Big Ten teams with a .156 opponent hitting percentage in conference play.

Record Watch
• Senior middle blocker Lauren Stivrins surpassed 1,000 career kills this season on March 12 against Ohio State. Stivrins became the 22nd Husker in school history to reach 1,000 career kills at Nebraska and the eighth player to do so in the rally-scoring era (2001-present).
• Lexi Sun also owns more than 1,000 career kills with 1,258 (337 as a freshman at Texas in 2017). Jazz Sweet is closing in with 915 career kills.
• Stivrins has also established herself as one of the most efficient hitters in Nebraska volleyball history. She has a .382 career hitting percentage, which ranks fourth all-time in school history and first since the rally scoring era began in 2001.
• Junior setter Nicklin Hames surpassed 3,000 career assists this season and now has 3,168 entering the week. She became the 10th Husker setter in school history to reach 3,000 career assists at Nebraska and the fourth in the rally scoring era (2001-present), joining Kelly Hunter (4,125), Sydney Anderson (3,332) and Lauren Cook (3,198).
• Junior middle blocker Callie Schwarzenbach is averaging 1.22 blocks per set in her Husker career. That is the third-best blocks per set average by a Husker since the rally scoring era began in 2001.

AVCA Hall of Fame Head Coach John Cook in 21st Season at Nebraska
• Nebraska head coach John Cook is in his 21st season as the Nebraska volleyball head coach in 2020-21. He has led the Huskers to four national championships, nine final fours, 12 conference championships and 18 top-10 final rankings since 2000.
• Cook has 759 career wins and is one of the all-time winningest coaches in NCAA history. Since taking over the program in 2000, Cook has led the Huskers to a nation-leading .878 win percentage in that time (598-83).
• Under Cook, the Huskers have achieved 57 AVCA All-Americans and 19 CoSIDA Academic All-Americans, both among the best in the nation. He is a two-time AVCA National Coach of the Year, earning the prestigious honor in 2000 and 2005, and a seven-time conference coach of the year, including Big Ten Coach of the Year in 2016 and 2017, his first and second Big Ten honors with the Huskers in their Big Ten era (2011-present).
• Cook is one of only four active coaches – and one of six all-time – to be a two-time AVCA National Coach of the Year and was honored in 2008 by USA Volleyball, receiving its All-Time Great Coach Award.
• Cook was inducted into the AVCA Hall of Fame in 2017, joining former Husker volleyball coach Terry Pettit in the hall.
• Cook became the ninth active Division I head coach to reach 700 career wins in 2018.

Hildebrand Returns to Huskers After 2017 NCAA Championship Season
• Former Nebraska volleyball assistant coach Tyler Hildebrand returned to the Huskers as an associate head coach in January 2020. Hildebrand, who helped coach the Huskers to an NCAA Championship in his only season at Nebraska in 2017, replaced Kayla Banwarth, who accepted the head coach position at Ole Miss in December.
• After the 2017 season, Hildebrand served as the Director of Coaching for the USA Volleyball Beach National Team Program.
• Hildebrand is the first associate head coach in Cook’s tenure (2000-present). He had a remarkable season at Nebraska in 2017, helping the Huskers win the NCAA title while coaching Hunter to first-team AVCA All-America honors and outside hitters Annika Albrecht and Mikaela Foecke to second-team All-America honors. Nebraska led all Big Ten teams in opponent hitting percentage (.154) as he coordinated the Huskers’ defense and game plans. His wife, former U.S. National Team captain Kristin Hildebrand, was a volunteer for the Huskers in 2017, but will not be this time around as she runs her own interior design business.
• “The 2017 season was one of my most enjoyable seasons as a head coach with Tyler and Kayla,” Nebraska Head Coach John Cook said. “Obviously we had great results, but Tyler made me a better coach that year. I think he has a gift for coaching in how he sees the game. He has a very positive way of challenging people, including me. That’s why I reached out to him. Part of my job as head coach is to provide the best staff possible for our team. I really feel like hiring Tyler and having him join our staff gives us the best chance to be successful.”

Huskers on the Big Screen
• The Nebraska volleyball team is annually one of the most televised programs in NCAA Division I Volleyball, and the 2020-21 season is no different. Seventeen of the Huskers’ 22 regular-season matches are set to be televised. Of the TV broadcasts, 12 of them will be national Big Ten Network broadcasts that will also be streamed on the FoxSports platform. And then five matches will be televised locally in Nebraska on NET. Those five matches will also be streamed to people outside of Nebraska through a BTN+ subscription, as will the remaining five non-televised matches.