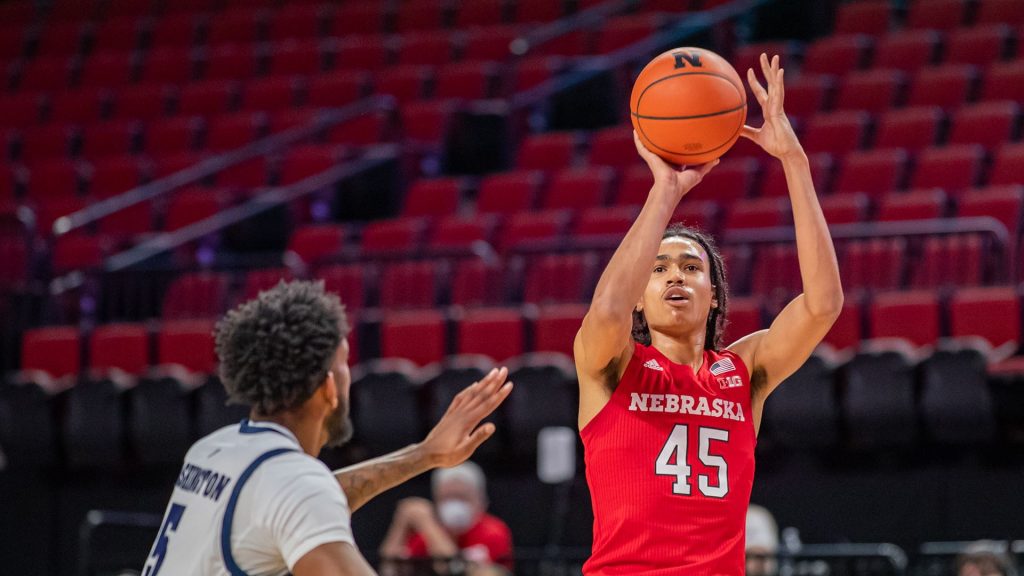 Lincoln – Nebraska rallied to take a 10-point lead midway through the second half, but a Grant Sherfield three-pointer with 7.1 seconds left gave Nevada a 69-66 win over the Huskers in the Golden Window Classic on Thanksgiving Day at Pinnacle Bank Arena.
Nebraska slipped to 1-1 with the loss, while Nevada improved to 2-0.
The Huskers trailed 35-26 late in the first half but behind the strong guard play of Dalano Banton and Kobe Webster Nebraska rallied to take a 55-45 lead with 9:34 left in the game. Banton finished with a team-high 18 points to go along with seven rebounds and five assists. In the first 10:05 of the second half, Banton hit two threes and two layups to score 10 of Nebraska’s first 24 points to stake the Huskers to a 53-45 lead.

Webster was nearly as productive during a similar stretch. His three-pointer at the buzzer to end the half closed the Nevada lead to 35-29. He added another three with 13:20 left in the game to give Nebraska a 44-43 lead, before adding a pair of free throws just 18 seconds later to put the Big Red up 46-43. Another Webster bucket with 9:34 left gave the Huskers their biggest lead of the day at 55-45 to cap a 14-2 Big Red eruption over a span of just 3:46. Webster finished with 13 points and three steals.

However, from the point of Webster’s final basket, the Huskers went 8:10 without a made field goal, as Nevada produced an impressive rally of its own to take a 64-60 lead with just under three minutes left.

Although the Huskers were down, they were not out as Lat Mayen ended the NU field goal drought with his second three-pointer of the game with 1:24 left to cut the lead to 64-63. Moments later, Banton put the Big Red back in front with his traditional three-point play with 56.5 left in the game to give Nebraska a 66-64 lead.

But Sherfield provided the game’s final heroics for the Wolfpack, hitting a pair of free throws with 42.5 left to tie the score at 66, before dribbling into a three-pointer near the top of the key with 7.1 left to put Nevada up for the last time.

Banton got a good look for the Huskers before the buzzer, missing just short on a three from the right wing. For the game, Nebraska went just 9-for-41 from three-point range, opening the contest 3-for-7 to jump out to a 10-2 lead, before missing 12 straight threes before Webster’s buzzer-beater to end the half. In the second half, the Huskers opened 4-for-10 from deep, before missing nine straight long-range attempts before Mayen’s final three with 1:24 left.

Along with hitting just 22 percent of their three-pointers, the Huskers went just 9-for-21 from inside the arc, finishing at 29 percent (18-62) overall against a tough Wolfpack defense. The Huskers also hit 21-of-30 free throws.

In a game that featured big momentum swings and somewhat drastic differences in styles, Nebraska won the turnover battle 21-9, but got out-rebounded 49-31. However, the Huskers outscored Nevada 13-8 in second-chance points.

Sherfield led all players with 19 points, including 12 in the final 6:08 of the game. His two three-pointers down the stretch were Nebrasa’s only made threes of the second half. While Sherfield closed the game strong for Nevada, Desmond Cambridge gave the Wolfpack the lead at the half by scoring 16 of his 18 points in the game during the final 7:45 of the opening period. Sherfield and Cambridge were the only members of the Wolfpack to finish in double figures.

Teddy Allen helped Nebraska get off to strong starts in both halves, finishing with 17 points, six rebounds and five steals in the game. Allen went just 3-for-11 from the field, but did hit 2-of-7 threes and went 9-of-13 at the foul line. Shamiel Stevenson added nine points for the Huskers.

The Huskers return to action on Saturday morning when they take on North Dakota State. Tipoff is set for 11 a.m. and will be televised on BTN and carried on the Learfield IMG Husker Sports Network.