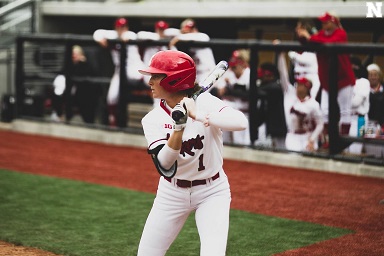 After splitting its first three Big Ten doubleheaders of the season, the Nebraska softball team was swept by No. 23 Michigan in a doubleheader Thursday in Leesburg, Fla.

The Huskers (3-5) received strong pitching performances in both games, allowing only four runs (three earned) in the doubleheader. But Nebraska’s offense scored just one run on the day as the Huskers lost 2-1 in eight innings in game one and 2-0 in game two.

Michigan (6-2) recorded the sweep thanks to a dominant performance from its pitching staff. All-American Meghan Beaubien, the reigning Big Ten Pitcher of the Week, fired an eight-inning no-hitter with 14 strikeouts in game one, and the only run she allowed was unearned. Alex Storako arguably topped that performance in game two, tossing a two-hit shutout with 19 strikeouts, tying Beaubien’s Big Ten record from last week for strikeouts in a seven-inning game. Storako struck out 10 consecutive Huskers at one point and Nebraska put only four balls in play against her.

In game one, Nebraska nearly pulled the upset despite being no-hit. Michigan took a 1-0 lead in the top of the sixth inning on an RBI single from Julia Jimenez, but Nebraska tied the game in the bottom of the frame when senior Tristen Edwards, who had walked, scored from second base on a Michigan error.

The loss spoiled a terrific outing from senior Olivia Ferrell, who struck out seven and allowed only one earned run and just three hits in a career-high 7.2 innings. Junior Courtney Wallace (2-1) also pitched well in game two, allowing only two runs in 5.0 innings.

Michigan plated the only runs of game two on a two-out, two-run single from Lauren Esman in the bottom of the fourth inning. In the doubleheader, all four of the Wolverines’ runs scored with two outs.

Nebraska wraps up its three-game neutral site series with No. 23 Michigan with a single game on Friday at 12:30 p.m. (Central).