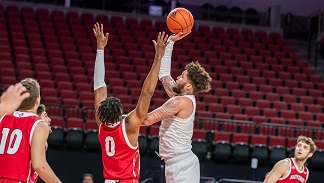 Lincoln – Teddy Allen scored 16 of his 23 points in the second half, as Nebraska improved to 3-1 on the season with a 76-69 win over South Dakota on Tuesday evening.

Allen and Kobe Webster combined for 13 points in a 19-6 second-half run, turning a 48-43 lead into an 18-point cushion with 6:01 remaining. Allen’s 23 points led five Huskers in double figures, while Webster had eight of his 11 points off the bench in the second half.

A.J. Plitzuweit finished with 24 points, including four 3-pointers, while Stanley Umude finished with 23 points and added 11 rebounds and five assists for South Dakota, which shot just 35 percent in falling to 0-3 on the season.

The Huskers return to action on Sunday afternoon when they take on Florida A&M. Tipoff is at 1 p.m. and the game will be carried live on BTN and also on the Learfield IMG Husker Sports Network.