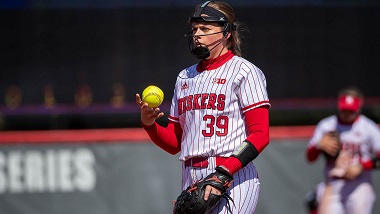 Atlanta, Ga. — The Nebraska softball team (4-2) trailed 2-1 after five innings but scored three unanswered runs in the final two innings to sneak away with a 4-2 victory over Georgia Tech (1-4) on Friday night as part of the Big Ten/ACC Challenge. The Big Ten claimed both victories at the site as Iowa beat Boston College, 4-0, in the first game of the day.

Olivia Ferrell (2-0) went the distance and gave up two runs – one earned – on five hits. She also recorded five strikeouts.

Offensively, Nebraska had seven hits on the day. Tristen Edwards went 3-for-4 with one run and one double. Keana “KP” Pola also had a multi-hit game going 2-for-3 with one run, one double and one RBI. Cam Ybarra and Payton Huscroft also had one hit on the day.

Georgia Tech’s Palmer Pinholster dropped to 0-1 on the season. She pitched 0.2 innings and gave up two runs on one hit.

Georgia Tech took a 1-0 lead in the first. The Yellow Jackets loaded the bases with no outs but Nebraska managed to get out of the jam with minimal damage. Three walks filled the bases. The Huskers retired the next batter for the first out of the game. Then Andrews made a great play at short to get the next batter out a first. However a runner scored on the play to give Georgia Tech the lead. Ferrell ended the inning with a strikeout.

In the second, Nebraska tied it up at 1-1. Pola and Huscroft hit back-to-back singles to put a pair of runners on with no outs. A ground out moved both runners over and another grounder plated one run. Unzicker drew one walk and stole second but a strikeout ended the inning.

The Jackets took a 2-1 lead in the third, taking advantage of Husker error and scoring one unearned run.

In the fifth, Edwards hit a leadoff double and reached third on a groundout, but Nebraska couldn’t bring her home. In the bottom of the inning, the Huskers got in a jam as two hits put runners in scoring position with no outs. However, NU stepped up defensively. Ferrell got a strikeout and Pola made a great catch at third to retire the next batter and tagged the runner to end the inning on a double play.

In the sixth, Pola hit a leadoff double to put the tying run in scoring position. Bree Boruff pinch ran for her and reached third on a groundout. On a squeeze play, Raley delivered a perfect bunt and Boruff scored on the play.

In the seventh, the Huskers jumped out to a 4-2 lead, taking advantage of a sloppy inning from Georgia Tech. NU had one hit but did damage after three walks, a hit batter, a passed ball and two wild pitches. Edwards singled and Ybarra drew a walk to put two runners on with no outs. Carson Fischer ran for Ybarra and after a ground out, both runners advanced on a wild pitch. Courtney Wallace came in to pitch hit and drew another walk to load the bases. Pola hit a sac fly to score the go-ahead run and put the Huskers up 3-2. A passed ball allowed both runners to advance and another walk loaded the bases again for Nebraska. A wild pitch scored Fischer and a hit batter filled the bases. This prompted a pitching change, who got a strikeout to end the inning.

In the bottom of the inning, the Huskers only allowed one baserunner after a walk.