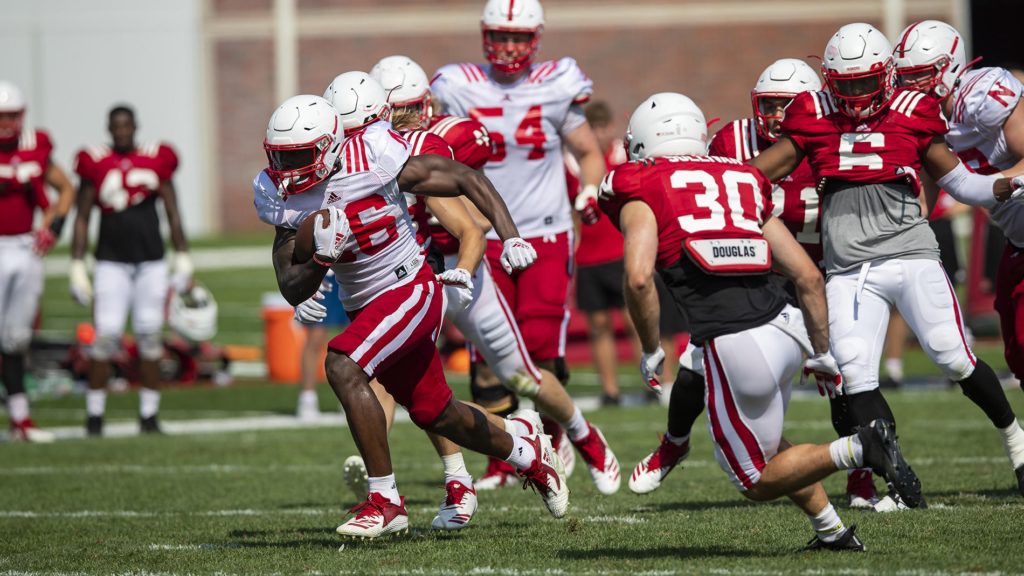 Lincoln, Neb. — The Nebraska football team practiced in full pads on Wednesday for just under two hours while splitting time inside the Hawks Championship Center and outside on the Ed and Joyanne Gass practice fields.

Offensive Coordinator Troy Walters spoke to the media after the conclusion of practice and began his session talking about the success of the offense in this past weekend’s scrimmage.

“As an offense we are executing at a faster pace,” Walters said. “Even the younger guys are picking up their sense of urgency and their tempo. The veterans on their first three possessions went down and scored. The next three, the defense shut us out. It’s a win-win. We win some and the defense wins some. It’s been good competition throughout camp.”

Walters continued by discussing the improvement and depth at the wide receiver position.

“I think we are going to be a pretty good unit,” he said. “A lot of guys have not played a whole lot, I’m putting them in pressure situations in practice, so that when the game comes around, they are ready to go. Going against our defense and secondary day in and day out makes our guys better. Iron sharpens iron. Those guys are making the young guys better. They are making everybody better. The reps we get against our secondary are going to make us better.

Walters was asked about sophomore wide receiver Javeon McQuitty and his recent play during practice.

“He has done a great job,” Walters said of McQuitty. “He understands the offense. The biggest thing is he is confident. Last year he wasn’t very confident. He kind of was more reactionary. Now he goes and makes things happen. He’s got that confidence. He made plays in the scrimmage. He keeps getting better and has that sense of urgency. He wants it. He wants to be a part of this team. He wants to contribute to the offense. That’s a good sign.”

Walters also touched on the running backs and specifically the duo of Maurice Washington and Dedrick Mills.

“They are playing well,” Walters said of Washington and Mills. “Rahmir Johnson is playing well. I feel like we have a bunch of running backs to contribute. We are going to need them all. Going into each game, we are going to scheme and find roles and fits and how their skill set can cause trouble to the opposing defenses. All of them are going to be involved.

“Mills is a downhill guy. When defenses get tired, he is going to break some tackles and get extra yards. Mo (Maurice Washington) is Mo, explosive and dynamic. Then you add Rahmir and some of the guys like Wan’Dale (Robinson) at running back….we feel pretty good about that position”