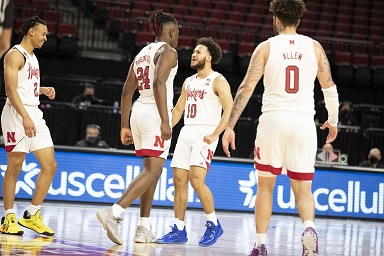 Lincoln – Six Huskers put up double figures as the Nebraska men’s basketball team topped 100 points for the first time since November of 2018, as the Big Red rolled to a 102-55 victory over McNeese State on Wednesday afternoon at Pinnacle Bank Arena.

Dalano Banton filled up the stat sheet with 14 points to go along with six rebounds, six assists, four blocked shots and three steals in just 22 minutes in his Husker debut. Trey McGowens, Teddy Allen and Shamiel Stevenson all added 14 points apiece in the first regular-season appearances at Nebraska.  Lat Mayen and Kobe Webster each pitched in 13 points in their Husker debuts as well, as Nebraska reached 102 points by going 36-of-72 from the field, including 10-of-24 (.417) from three-point range. The Huskers also knocked down 20-of-29 free throws, matching their season high for free throws made in a game from the 2019-20 season.

Nebraska forced 27 turnovers by McNeese State, five more than the Huskers forced in any game in 2019-20. The Big Red turned the ball over just 10 times and outscored the Cowboys 43-8 in points off turnovers for the contest.

Nebraska never trailed in the game, as Mayen got the Huskers off to a hot start by hitting a pair of threes while McGowens added a three of his own and a thunderous dunk on a lob pass in transition to put the Huskers up 11-3 in the first 4:03. Mayen added his third straight three-pointer to open his career and finished with 11 first-half points to lead the Big Red to a 50-28 halftime lead. The Huskers hit 57 percent from the field, including 53 percent from long range in the opening 20 minutes.

The defenses put up stingier efforts at the start of the second half, before Nebraska erupted on a 25-2 run that started with approximately 13 minutes left in the game. Nebraska continued to extend the lead throughout the half, eventually reaching 50 points at 102-52 before a buzzer-beating three-pointer near halfcourt to end the game for McNeese State.

Nebraska sophomore forward Yvan Ouedraogo added nine points and a team-high rebounds, while Jace Piatkowski knocked down the three-pointer to put the Huskers at the century mark in the closing minutes.

Senior guard Thorir Thorbjarnarson also played a strong all-around game for the Huskers, finishing with eight points while helping to limit one of the nation’s top three-point shooters, Dru Kuxhausen from Scottsbluff, to just 11 points. Kuxhausen led the Cowboys before fouling out with less than five seconds left, while Carlos Rosario and Ra’Shawn Langston each contributed 10 points.

Nebraska returns to action on Thanksgiving day in its first game of the 2020 Golden Window Classic. Tip-off against the Wolf Pack is set for 1 p.m. (CT) with live television coverage by the Big Ten Network.