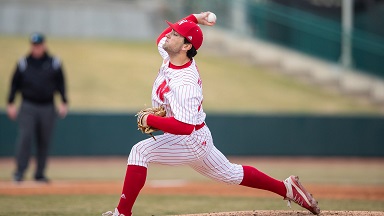 Lincoln, Neb. – The Nebraska baseball team (6-8) held Northern Colorado to four hits in a 1-0 shutout victory at Hawks Field on Tuesday evening. With the win, the Huskers have triumphed in five of their last six games.

Pitchers Braxton Bragg, Shay Schanaman and Paul Tillotson helped blank the Bears in the first of two midweek contests between the squads. Bragg, making his first career start, threw a season-high 3.0 innings and recorded a season-high three strikeouts, while allowing only two hits and one walk.

Schanaman came out of the bullpen for a career-high 5.0 innings and struck out a career-high six batters, while giving up only one hit. Tillotson earned his second save of the season by pitching the final 1.0 inning and recorded three strikeouts, while allowing only one hit.

Freshman Luke Boynton, who led NU’s offense against Columbia over the weekend with a 7-for-12 showing over three games, extended his hitting streak to four games with a 2-for-3 outing on Tuesday. Boynton has multiple hits in three of his last four games.

As a team, Nebraska compiled five hits, as Jaxon Hallmark, Luke Roskam and Joe Acker each managed a hit against the Bears. Acker, the reigning Big Ten Player of the Week, extended his team-long hitting streak to six consecutive games.

After a scoreless first four innings for both teams, Nebraska scored its lone run in the bottom of the fifth. Roskam ripped a leadoff double before advancing to third on Acker’s sacrifice bunt. Boynton drove in Roskam with an RBI single to left field.

The Huskers and Bears conclude their two-game series on Wednesday at Hawks Field. First pitch is set for 1:35 p.m. (CT).