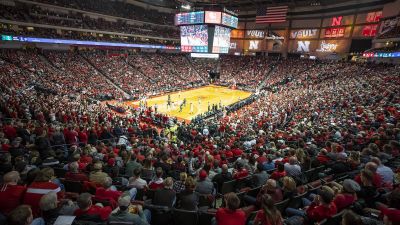 Lincoln – Husker basketball fans can officially start counting down to the start of the Fred Hoiberg era, as the Nebraska men’s basketball program released its 2019-20 non-conference schedule on Wednesday. The 11-game non-conference slate includes three games at the Cayman Islands Classic, a meeting with Georgia Tech in the Big Ten/ACC Challenge, the annual in-state matchup with Creighton and a renewal of games against regional foes South Dakota State and North Dakota. Nebraska will open the season with four straight home games before hitting the road for the Cayman Islands Classic in late November. The Huskers will officially open the Fred Hoiberg era on Tuesday, Nov. 5, when the Huskers host UC Riverside in the first meeting between the two programs. It is the earliest season-opener in school history. NU will host Doane in an exhibition game at Pinnacle Bank Arena on Wednesday, Oct. 30.

The Huskers continue the homestand against a pair of teams that made the postseason last year in Southern Utah (Nov. 9) and South Dakota State (Nov. 15). Southern Utah reached the second round of the CIT last season and returns three of its top four scorers. It is the first meeting between the Huskers and the Thunderbirds since 2009. South Dakota State went 24-9 last year and won the regular-season Summit League title before falling to eventual champion Texas in the NIT. The Jackrabbits made three straight NCAA appearances before the 2019 NIT trip. It is the first meeting between NU and SDSU since 2011. The contest with Southern (Nov. 22) is part of the Cayman Islands Classic, as each of the eight teams will play one home game prior to the tournament. The field for the Cayman Islands Classic (Nov. 25-27) includes Colorado State, George Mason, Loyola (Chicago), New Mexico State, Old Dominion, South Florida and Washington State. The pairings for the bracket will be announced later this summer. The Huskers open the month of December with road games at Georgia Tech in the Big Ten/ACC Challenge (Dec. 4) and at Creighton (Dec. 7). The Bluejays went 20-15 and reached the NIT before losing to TCU last season. Nebraska will play two conference games ahead of final exams before returning to the court for its final two non-conference games against North Dakota (Dec. 21) and Texas A&M-Corpus Christi (Dec. 29).

The matchup with UND will be the Huskers’ first against the school since 2017 and the third meeting since the Fighting Hawks joined Division I. The Huskers will close out non-conference action against a TAMU-CC team that finished sixth in the Southland Conference last season. It will be the first meeting between the Huskers and Texas A&M-Corpus Christi. The 17-game home schedule at Pinnacle Bank Arena this season is highlighted by 10 Big Ten matchups, including tilts with NCAA qualifiers Michigan State, Purdue, Michigan, Ohio State, Iowa and Wisconsin, along with games against Indiana, Northwestern, Penn State and Rutgers.