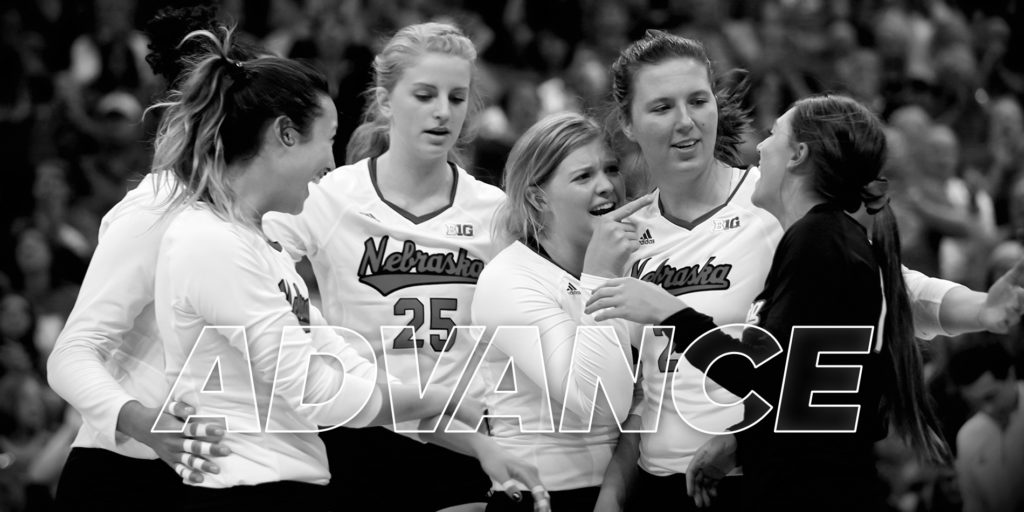 MINNEAPOLIS, Minn. – The sixth-ranked Nebraska volleyball team stifled one of the nation’s top offenses to earn a seventh straight trip to the NCAA Regional Finals with a 3-0 (25-17, 25-20, 25-23) sweep of No. 10 Kentucky on Friday at Minnesota’s Maturi Pavilion.

The Huskers won their 11th straight match to improve to 27-6 on the season and will face No. 14 Oregon on Saturday at 5 p.m. The match will be broadcast on ESPNU, WatchESPN.com and Husker Sports Network radio affiliates.

Nebraska out-hit Kentucky .239 to .165, holding the Wildcats to a season-low hitting percentage. It marked the 13th time this season Nebraska has held an opponent to a season-low hitting percentage. Kentucky entered the match hitting .304 this season, the fourth-best mark in the nation, but Nebraska blocked the Wildcats eight times.

Nicklin Hames had 38 assists and 11 digs for her 22nd double-double of the season, which ties Jordan Larson for NU’s most in a single season in the rally-scoring era.

Nebraska had two more aces (4-2) and four fewer service errors (5-9) than the Wildcats (26-5), who had their 23-match win streak snapped. The Huskers had a 55-49 edge in digs, with Kenzie Maloney, Megan Miller and Hames all posting 11 digs.

Set 1: Sun had two early kills and an ace, as the Huskers rallied from down 3-1 to take an 11-7 lead, while Kentucky committed three service errors and three attacking errors. Two kills by Alli Stumler brought Kentucky within two, but Stivrins and Foecke terminated back-to-back kills to restore a four-point lead, 13-9. A back-row kill by Foecke and a Kentucky miscue made it 15-10 Huskers. After the Wildcats cut it to three, they committed another service error and Stivrins and Foecke stuffed an attack for an 18-13 lead, forcing Kentucky’s second timeout. Maloney came out of the timeout with an ace to make it 19-13. Stivrins and Sun tacked on three more kills and combined for a block, and the Huskers increased the lead to 24-15 after an 8-2 spurt. Nebraska won 25-17, holding Kentucky to .100 hitting. Sun had four kills and no errors to lead the Big Red.

Set 2: The Huskers picked up where they left off in set one, taking a 6-1 lead courtesy of two blocks by Sweet, one with Schwarzenbach and one with Stivrins. Foecke blasted three more kills and put the Huskers up 8-2. The Huskers used a timeout after Kentucky pulled within 9-5 via back-to-back blocks. Stivrins immediately earned sideout for the Huskers, and a tough serve by Hayley Densberger forced a Kentucky hitting error to make it 11-5 Huskers. Nebraska led 14-7 after kills by Sun and Sweet, but Kentucky responded with a 3-0 run out of a timeout to get within four, 14-10. The teams traded six sideouts before Avery Skinner and Caitlyn Cooper terminated for Kentucky to get the Wildcats within 17-15. Stivrins ended the Wildcats’ 3-0 run with back-to-back slide kills to make it 19-15. Kentucky got back within two at 21-19 but then committed a service error. Sweet found the floor for a kill, and Foecke and Schwarzenbach blocked Wildcat attacks for the final two Husker points to give them a 25-20 win and a 2-0 lead in the match.

Set 3: Nebraska fell behind 4-1 but rallied to tie the set at 6-6 with back-to-back kills by Stivrins and Sun. The Wildcats then went on a 5-0 run to take an 11-6 lead, however. A pair of kills by Sun brought NU within three, 12-9, but Kentucky had an answer once again, scoring the next three points for a 15-9 lead. The lead went to seven before Foecke killed consecutive rallies and Miller served an ace to cut it to four, 18-14. After Kentucky got sideout, Stivrins struck for two more kills and Kentucky hit long to get the Huskers within 19-17. Kentucky went back ahead by four, 22-18, but Sun’s 13th kill and a block by Sweet and Schwarzenbach cut the deficit back to two, 22-20. Nebraska trailed 23-20 when Sweet connected for kills from both the left and right sides to cut it to one, 23-22, and Foecke terminated to tie the set at 23-23, the first tie since 6-6. Nebraska earned match point at 24-23 after winning a challenge that Kentucky committed a net violation, and Foecke finished the match off with her match-high 14th kill.