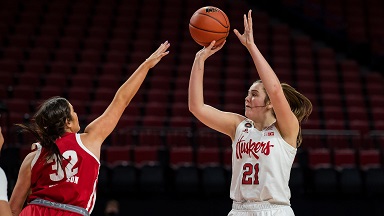 Nebraska improved to 9-5 overall and 7-4 in the Big Ten with its most lopsided conference victory of the season. Wisconsin slipped to 3-11 overall and 0-11 in the league.

Haiby, a 5-9 junior guard from Moorhead, Minn., set the tone early for the Big Red by putting up 18 points in the first half before adding her final six in the fourth quarter to silence a late Badger rally after NU built a 26-point lead. Haiby hit 8-of-13 shots from the field for the game, including a pair of three-pointers, while going a perfect 6-for-6 at the free throw line. She also dished out a game-high five assists without committing a turnover.

While Haiby did damage outside, Cain and Cravens dominated inside at both ends. Cain notched her third double-double of the season and 15th of her career with 16 points, 10 rebounds and six blocked shots for the Big Red. Cain hit 7-of-10 shots from the field and helped set the second-half tone for the Huskers by scoring seven points in the first five minutes of the third quarter.

Cravens added the first double-double of her Husker career with a season-high 13 points to go along with a team-high 11 rebounds. Cravens, who hit 5-of-7 shots from the field and all three of her free throw attempts, added three blocks of her own as Nebraska racked up 10 blocks as a team on the night. Cain and Cravens each added a pair of assists, as eight different Huskers posted at least two assists on the night.

Freshman post Annika Stewart had her second straight double-figure scoring effort off the bench with 13 points while adding five rebounds and a block. It was Stewart’s fifth double-figure scoring performance of the season. Fellow freshman Ruby Porter added double figures for the second consecutive game as well with a career-high 12 points. Porter also pitched in two assists and two steals in arguably her best all-around effort of the year.

While those five Huskers put up double-digit points, freshman guard Whitney Brown added a pair of third-quarter threes to push Nebraska’s lead past 20 points late in the period. Redshirt junior and graduate student MiCole Cayton, who was making just her second appearance in a Husker uniform, added four assists and a steal off the bench, while the newest Husker, Kendall Coley, made her first game appearance for the Big Red late in the first half. Coley, who joined the Huskers as an early enrollee out of St. Louis Park High School in Minneapolis last week, played two minutes.

In a high-scoring first half for the Huskers, Haiby erupted for 18 points on 7-of-9 shooting including 2-of-3 from long range to help Nebraska build a 19-point lead late in the first half. Haiby scored 11 points in the first quarter to match Wisconsin’s team total, as the Huskers led 20-11 at the end of the period.

Porter, who made her fourth straight start in place of fellow Australian Isabelle Bourne, poured in 10 first-half points to help Nebraska push its lead to double digits early in the second quarter. Stewart added six first-half points, joining forces with Porter to score Nebraska’s first 10 points of the second period. Cain contributed five points, seven rebounds and a block in the first half, while Cravens added four points and five boards.

Nebraska held Wisconsin to just 30.3 percent shooting in the first half, including just 3-of-15 in the opening quarter. The Badgers went just 1-for-5 in the half from three-point range, while playing without starting guard Julie Pospisilova, who entered the game with a team-high 24 three-pointers on the season. Imani Lewis led Wisconsin with 19 points and 13 rebounds. Sydney Hilliard added 16 points, while Sara Stapleton pitched in 12 points and six rebounds for the Badgers.

The Huskers will enjoy a week off from competition before returning to Big Ten road action next Thursday at Penn State. Tip-off between Nebraska and the Nittany Lions at the Bryce Jordan Center in University Park, Pa., is set for 5 p.m. (CT)