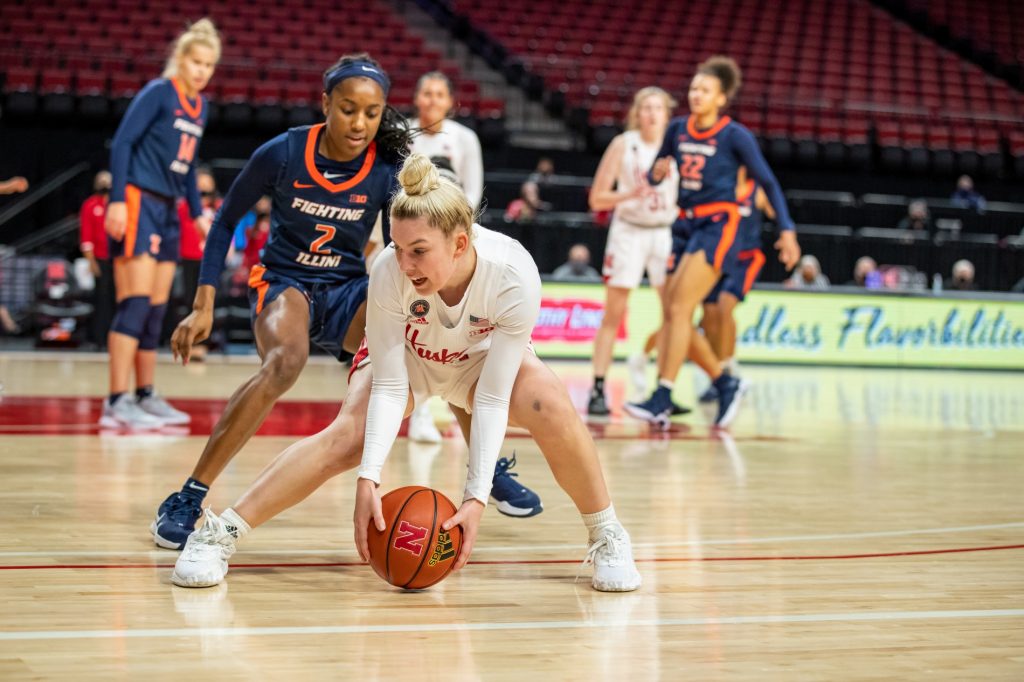 Lincoln – Sam Haiby erupted for a career-high 33 points while Isabelle Bourne added a career-high 21, as Nebraska improved to 3-0 on the young season with a 78-72 come-from-behind women’s basketball win over Illinois on Thursday night at Pinnacle Bank Arena.

Haiby, a 5-9 junior guard from Moorhead, Minn., scored 21 of her game-high 33 points in the second half, including 10 points in the final 5:41 to lead Nebraska to victory, after the Huskers fell behind 62-57 with just over six minutes left in the contest. Haiby eclipsed her previous collegiate-best 28 points (at Missouri, Nov. 10, 2019) by going 9-of-17 from the field and 14-of-16 at the free throw line, including 11-for-11 in the second half. They were the most points scored by a Husker since the 2015-16 season. Haiby added nine rebounds, four assists and two steals in a tremendous all-around performance.

Bourne was just as big for the Huskers on the night, especially down the stretch. The 6-2 sophomore forward from Canberra, Australia, scored eight of Nebraska’s first 10 points in the fourth quarter to help rally the Big Red. She surpassed her previous career high of 16 points, which she set last year in the Big Ten Tournament against Michigan. Bourne went 8-for-13 from the field while adding eight rebounds and Nebraska’s other two steals in the game.

While Haiby and Bourne produced career-high scoring nights, newcomer Bella Cravens led a monster night on the boards by tying her collegiate career best with 16 rebounds. Cravens’ work on the glass included 12 second-half boards against an Illinois team that entered the game with a plus-11 average rebound margin over its first three opponents this season.

Cravens (16), Haiby (9) and Bourne (8) combined for 33 of Nebraska’s 47 rebounds, while the Illini managed just 35 rebounds as a team on the night. Cravens added three points and two blocked shots while making the first start of her Husker career.

Although she didn’t fill the stat sheet, senior center Kate Cain made huge plays at the defensive end to help fuel a 13-0 run during a three-minute span in the game’s final four minutes.

Trailing 67-63, Nebraska got a Bourne jumper with 3:10 left to cut the Illini lead in half. Cain then followed with a tough defensive rebound and was fouled with 2:52 to send her to the other end for two free throws. She hit both to tie the game. Nebraska then got a Cravens defensive rebound to secure another stop to set up Haiby’s layup for a 69-67 lead with just over two minutes left.

Haiby then cleared the defensive glass on a missed three-pointer by Aaliyah Nye. On the ensuing offensive possession, Haiby missed a shot but got her own rebound and was fouled, knocking down a pair of free throws with 1:28 left to give Nebraska its biggest lead of the game at the time at 71-67.

Cain then came through with a key block of an Eva Rubin shot with 1:07 left, before clearing another defensive rebound and again being fouled. Cain walked to the other end and buried both free throws to put the Big Red up 73-67 with 56 seconds left.

Nebraska continued to clear defensive glass and make life tough on Illinois shooters, while converting free throws, eventually pushing its lead to 76-67 with 38 seconds left, before Solape Amusan stopped the Husker run with her third three-pointer of the fourth quarter. But it was too little too late for the Illini, who slipped to 2-2 on the year.

Nebraska’s defense held Illinois to 35.2 percent (25-71) shooting, but the Illini hit 9-of-23 (.391) three-pointers including three apiece from Jada Peebles and Amusan. Peebles finished with a team-high 16 points, while Amusan and Rubin added 13 each for Illinois. The Illini went 13-for-20 at the free throw line.

Nebraska returns to non-conference play on Monday when the Huskers hit the road for the first time this season to take on Creighton. Tip-off between the Big Red and the Bluejays is set for 5 p.m. at D.J. Sokol Arena in Omaha.