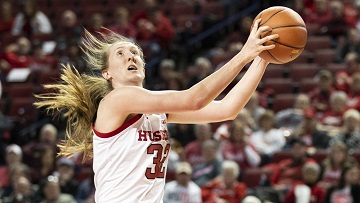 The Huskers improved to 16-9 overall and 6-8 in the Big Ten behind a late run to end the first half and their best offensive third quarter of the season to take control and never look back. Penn State slipped to 7-18 overall and 1-13 in the conference.

After trailing for much of the first half, Nebraska closed the second quarter on an 8-0 run in the final 2:30. The Huskers got their final two points on a pair of free throws by Hannah Whitish with 6.3 seconds left, after she was fouled on a defensive rebound by PSU’s Siyeh Frazier – her third foul of the game. Whitish finished with five points on the night.

Shay Hagans led Penn State with eight first-half points, all in the opening quarter, before being whistled for her second foul in the first minute of the second quarter. Fellow freshman Makenna Marissa, who led PSU on the night with 15 points, added seven points in the half. A third freshman, Anna Camden, contributed six of her nine points in the opening half on a pair of threes. Those three first-year Lady Lions combined for all five of the Penn State three-pointers (5-8). They also combined for all eight of PSU’s threes in the game. After going 4-for-7 from long range in the first quarter, the Lady Lions went just 4-for-22 the rest of the way.

In the second half, Nebraska erupted for a season-high 26 points in the third quarter while holding Penn State to just 12. The Huskers hit 11-of-14 shots from the floor in the quarter, including nine straight shots to surge to a 15-point lead at the end of 30 minutes.

Penn State trimmed the margin to 12 early in the fourth quarter and Husker center Kate Cain, who contributed six points, eight rebounds, six blocks and a steal in the game, was whistled for her fourth foul. But Bourne erupted for seven of NU’s next nine points in a span of less than two minutes to end any Lady Lion hopes of a comeback by pushing the lead to 69-48 with 6:19 left.

On the defensive end, Nebraska blocked four shots in the fourth period without Cain on the floor to match its season high with 12 blocks in the game.

The Huskers return to Big Ten road action this weekend by traveling to Evanston, Ill., to take on No. 19 Northwestern. Tip-off between Nebraska and the Wildcats from Welsh-Ryan Arena is set for 2 p.m (CT).